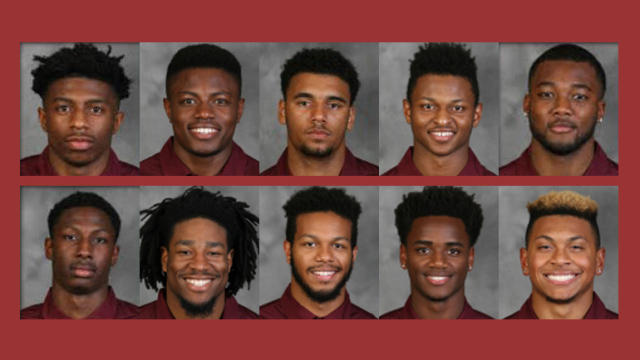 MINNEAPOLIS -- The University of Minnesota panel that heard the case of alleged involvement by 10 football players in a sexual assault on campus cleared four students, eased the sanctions on one player and upheld the punishments for the other five.

Some of the other six players are facing expulsion. They remained active as students during the investigation, CBS Minnesota reports. All parties, including the woman involved, can now appeal to the university provost. The Sept. 2 incident did not yield criminal charges, but it triggered an investigation by the university’s Equal Opportunity and Affirmative Action Office that led to 18 hours of hearings last week in front of a three-person panel of university employees.

Hutton did not specify the panel’s rulings on the six players still facing punishment but said they were “very disappointed” by the results. Twin Cities television station KSTP reported cornerbacks Ray Buford Jr. and KiAnte Hardin, safety Dior Johnson and defensive end Tamarion Johnson had recommended expulsions upheld, quarterback Mark Williams had a one-year suspension upheld and running back Carlton Djam had a recommended expulsion reduced to a one-year suspension.

“Seth Green, Kobe McCrary, Antonio Shenault and Antoine Winfield Jr. are very pleased to be vindicated by the panel’s rulings,” Hutton said in a statement distributed by his Minneapolis law firm. “The allegations against them were unwarranted and could have greatly harmed their bright futures. They look forward to putting this incident behind them and moving ahead in their academic and athletic pursuits.”

Hutton said the other six players were “exploring their options in consultation with their families.”

University spokesman Evan Lapiska said “the law does not allow us to talk about further specifics about the events behind the suspensions. Title IX and other related proceedings are also confidential throughout the due process that the university’s policies provide.”

The EOAA office investigates sexual assault complaints on campus as part of federal Title IX law and recommended the punishments after concluding the players violated the student conduct code. The players denied wrongdoing and remained enrolled in the university despite being suspended from the team since mid-December.

The woman involved alleged she was pressured into sex with multiple football players after a season-opening win over Oregon State. Four of the players - Buford, Hardin, Dior Johnson and Tamarion Johnson - were initially suspended for three games during the police investigation. They were reinstated before the Iowa game on Oct. 8.

The woman, who was working on the game-day operations staff at TCF Bank Stadium, then asked the court for and received restraining orders barring the players from the team’s home field and her on-campus apartment. The orders also covered Djam and cornerback Kiondre Thomas, an 11th player who was not part of the EOAA investigation. The bans kept those six players out of the game against Rutgers on Oct. 22, before they were lifted prior to the Purdue game on Nov. 5.

Hennepin County authorities twice declined to charge any of the players, citing a lack of evidence, but the federally mandated Title IX investigation carries a lower burden of proof.

The EOAA report, which was eventually leaked to Twin Cities television station KSTP, rocked the program. The entire football team threatened to boycott the Holiday Bowl against Washington State while lobbying for due process for the 10 players investigated. The players ultimately decided to play in the game, a 17-12 victory on Dec. 27, but many of them took the field in San Diego despite deep mistrust and resentment toward President Eric Kaler and athletic director Mark Coyle.

Players were especially upset that Green, McCrary, Shenault, Williams and Winfield, who were not alleged to have been involved in sexual contact with the woman, were included in the report that became public without warning and banned from the bowl game before having the opportunity to plead their case.

One week after the upset of over the Cougars, Claeys was fired and replaced three days later by P.J. Fleck.

The 10 accused players went through more than 18 hours of hearings over two days last week in front of the three-person panel. The woman and other university-summoned witnesses testified on Jan. 26, and the players gave their response the following day. The panel was required to produce a decision within a week, but unlike a criminal trial that requires a unanimous verdict by a jury the university proceeding required a simple two-person majority.

Hardin, a sophomore, and Winfield, a freshman, were starters in the secondary in 2016. Buford and Shenault were backups listed on the two-deep position chart.

“Who knows how many defensive backs we’ll have going into spring ball and next season?” Fleck said earlier this week on national signing day after his staff included three defensive backs in the 2017 recruiting class.

Green emerged from his redshirt year as a leading candidate to win the quarterback job after the departure of four-year starter Mitch Leidner. McCrary, a junior, was the third option in the backfield behind sophomore standouts Rodney Smith and Shannon Brooks. Djam, Johnson, Johnson and Williams, all either freshmen or sophomores, did not have significant roles in 2016.

McCrary tweeted Friday afternoon: “Blessed man!!!! Ready to get back at it with my boys!”