By dawn's early light, a United Launch Alliance Atlas 5 rocket streaked away from Cape Canaveral Thursday, kicking off a six-hour mission to place a $1.1 billion military communications satellite into orbit, the fifth in a globe-spanning network of high-speed, jam-proof relay stations.

Built to withstand the electromagnetic effects of nuclear blasts and resist the most sophisticated enemy jamming, the Advanced Extremely High Frequency -- AEHF -- communications stations "augment our warfighter's ability to fly, fight and win, and do that at epic speed," said Don Ruffin, chief of the Air Force Strategic SATCOM Division.

"We're confident the AEHF system will allow our National Security Council and our unified commanders to control tactical and strategic forces at all levels of conflict," Ruffin said.

The Atlas 5's Russian-built RD-180 first stage engine roared to life with a rush of fiery exhaust at 6:13 a.m. EDT and quickly throttled up to liftoff power. An instant later, five Aerojet Rocketdyne solid-propellant strap-on boosters ignited with a crackling roar and the rocket was released from its seaside pad.

Generating a combined 2.6 million pounds of push, the Atlas 5 put on a brilliant morning show as the first stage exhaust plume, lighted from behind by the rising sun, dramatically expanded in the lower-pressure upper atmosphere, as the booster arced away to the east over the Atlantic Ocean.

The strap-on boosters burned out and were jettisoned about a minute and 45 seconds after liftoff, followed by first stage engine shutdown and separation about three minutes later. The hydrogen-powered Centaur second stage engine then took over for the first of three planned burns.

The flight plan called for the AEHF-5 satellite to be released from the second stage five hours and 40 minutes after launch.

Flying in an initially elliptical orbit with a predicted high point of 21,933 miles and low point of 8,969 miles, the satellite's on-board propulsion system will be used to circularize the orbit at an altitude of 22,300 miles above the equator. Satellites at that altitude take 24 hours to complete one orbit and thus appear stationary in the sky.

If all goes well, AEHF-5 will reach geosynchronous orbit in the October timeframe. Engineers then will begin an exhaustive series of tests and checkout operations before turning the spacecraft over to the Air Force for operational use.

The satellites provide "anti-jam, always on connectivity during all levels of conflict and weather," said Mike Cacheiro, Lockheed Martin AEHF program manager. "It enables strategic and tactical users to communicate globally across a high-speed, dedicated network that delivers protected communications, including real-time video, battle mapping and targeting in any environment."

He said one AEHF satellite provides more capacity than five MILSTAR satellites that are being phased out.

But that capability comes at a high cost. The six-satellite AEHF constellation and ground system have a total price tag of nearly $10 billion.

The first two satellites in the series, launched in 2010 and 2012, together cost about $5.8 billion, including ground systems and terminals, officials said. The third satellite cost some $900 million while the fourth, featuring a variety of modifications, had a price tag of $1.8 billion. AEHF-5 was valued at $1.1 billion. 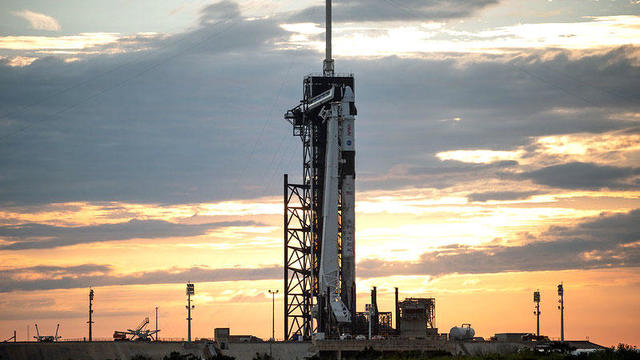 What to know about the charges in the Derek Chauvin trial

The 12-member jury was given detailed instructions to guide them as they weighed three charges against the ex-cop in George Floyd's death.