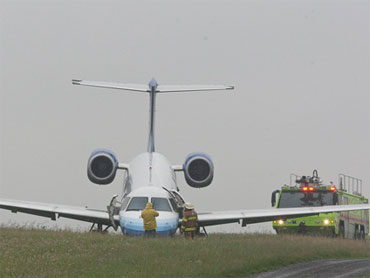 A United Express plane with 36 people aboard skidded off the runway at Ottawa's Macdonald-Cartier International Airport, causing minor injuries to two crew members.

Airport spokeswoman Krista Kealey said Wednesday that 33 passengers and three crew were arriving aboard Flight 8050 from Washington when plane skidded off the end of the runway.

The plane is sitting off to the side at the end of the runway. Everyone aboard the Brazilian-built Embraer 145 was evacuated.

Canada's Transportation Safety Board is investigating the cause.