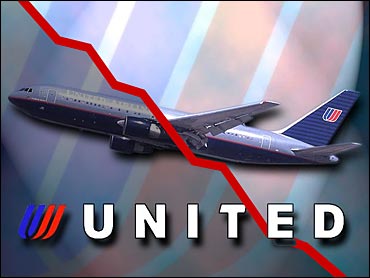 The ruling, which carries broad implications for U.S. airlines and their workers, shifts responsibility for United's four defined-benefit plans to the government's pension agency.

That will save cash-strapped United an estimated $645 million a year, part of the $2 billion in annual savings it says it needs to line up enough financing to emerge from Chapter 11 bankruptcy as soon as this fall.

The company's pension system was as much as $10 billion in the hole, CBS News Correspondent Jim Axelrod reports. And that's why it asked a federal judge to exempt it from the promise of paying workers by digging that hole deeper.

But, United workers stand to lose as much as one third of what was promised to them. The federal program taking over the affected workers' pension plans is itself $23 billion dollars underwater, Axelrod reports.

That one-third figure for employees translates to an annual loss of thousands of dollars off their pensions, once they are assumed by the Pension Benefit Guaranty Corp.

The PBGC, the government's pension insurer, initially opposed United's plan. But it agreed to drop that resistance last month in exchange for up to $1.5 billion in notes and convertible stock in a reorganized UAL Corp., United's holding company.

United's pensions are underfunded by an estimated $9.8 billion, of which the PBGC would guarantee only about $5 billion. The previous largest U.S. pension default was Bethlehem Steel's $3.6 billion in underfunding in 2002.
Judge Eugene Wedoff said the settlement, while disputed, does not violate any law or United's collective bargaining agreement and he noted that employees at companies such as United could end up with fewer or even no benefits if no arrangement is made and the company goes broke.

"The least bad of the available choices here has got to be the one that keeps an airline functioning, that keeps employees being paid," he said.

United Chief Financial Officer Jake Brace said the ruling is crucial for United to come out of bankruptcy.

"It's not a good outcome. It's unfortunately a necessary outcome," he said. "This is not in any way a joyous day. It is an important step in our restructuring and in making our airline successful and viable for the long term."

United's effort to dump its pensions has been watched closely by the rest of the airline industry, where record fuel costs, the lowest fares since the early 1990s and stiff competition have caused network carriers to lose billions of dollars. Tuesday's ruling, following a step taken successfully by US Airways Group Inc. in February, clears the way for similar actions elsewhere.

United's biggest competitors would be under the most pressure to follow suit. American Airlines, the largest U.S. carrier and a unit of AMR Corp., has said it will keep its pension plans but is concerned about No. 2 United gaining a financial advantage with the elimination of its pensions.

On Wednesday, flight attendants for American will gather in Washington to lobby for federal pension reform that would allow carriers to extend the amount of time they have to replenish underfunded plans and provide relief to airlines that seek, through collective bargaining, to preserve rather than terminate their pension obligations.

No. 3 Delta Air Lines Inc., which has said it is in danger of being forced to file for Chapter 11 bankruptcy, faces $3.1 billion in pension payments over the next three years.

An overflow crowd of current and former United workers showed up at bankruptcy court Tuesday, with more than 100 packing the courtroom and dozens more listening to piped-in proceedings in a separate courtroom.

Unions representing United's flight attendants, mechanics and ramp workers have expressed their ire at both the airline and the government's pension insurer, PBGC, for agreeing to drop its opposition to United's plan last month. In exchange for that settlement, the PBGC would get as much as $1.5 billion in notes and convertible stock in a reorganized UAL Corp., United's holding company.

Attorney Jeffrey Cohen said the PBGC, which might have been unable to halt United's plan in any case, made the agreement as "a matter of last resort." Disputing the flight attendants' contention that the deal violated its mission, he said the agency concluded that cutting a deal was in the best interest of not only those with pensions at United and other companies but also for taxpayers who fund the pension insurer.

In addition, he said, "We think it helps clear a path to the exit door" for United to leave bankruptcy.

CBS' Axelrod spoke with Airline Analyst Brad Bartholomew, who said strikes and protests by employees are understandable, because losing one's pension is a "life-changing event."

"For employees that are losing their pension this is a horrible event," Bartholomew said. "It's promises that have been made to them for 10, 20, 30 years that are now being broken."

Robert Clayman, an attorney for the Association of Flight Attendants, drew loud applause and cheers from employee spectators in both the courtroom and auxiliary court with an emotional appeal to preserve the pensions and workers' secure retirements.

"Without equity there is no justice," he said.

Jack Carriglio, an attorney for retired United pilots, said the airline should be ashamed of the agreement and warned of the consequences among angry employees.

"A strike is a real prospect if that agreement is approved," he said. "Also, this will have a grave impact on United employees' morale."

United's controversial move risks provoking action by employees who already have agreed to sharp cuts. Unions have raised the possibility of striking if United terminates the pensions and has its labor contracts overhauled.