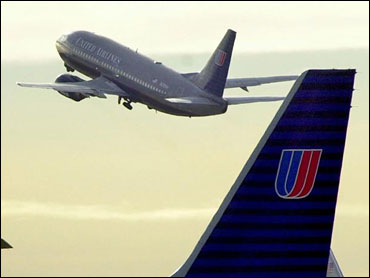 United Airlines' parent company filed its long-delayed reorganization plan Wednesday, declaring its intention to emerge from federal bankruptcy next February as a "much more competitive" firm than the one that entered Chapter 11 protection in December 2002.

The huge filing, made in U.S. Bankruptcy Court, lays out UAL Corp.'s intentions for United and the 26 other, smaller subsidiaries involved in the restructuring as well as its proposals for repaying creditors.

Glenn Tilton, United's chairman, CEO and president, told employees in a recorded message that the target date for exiting bankruptcy is now Feb. 1.

The airline first faces months of likely heated debate over the plan, however, from creditors and investors who want bigger payouts than the mostly stock distribution envisioned by the company.

"People who assume that this is a done deal are making a mistake," said bankruptcy expert Bill Brandt, president and CEO of Chicago-based restructuring firm Development Specialists Inc. "It's a starting point, a structure. ... In many ways, for many of the parties in this case, it's 'Game on."'

The bankruptcy overhaul, initially expected to last 18 months, is now ensured to take more than three years — complicated by higher fuel prices, the difficulties in obtaining two rounds of labor cuts and the failure to secure federal loan guarantees.

But the No. 2 U.S. carrier is hopeful that its return to the black — excluding hefty restructuring costs — and positive cash flow this summer signals a turnaround is finally under way.

"United has made tremendous progress in our restructuring to improve performance across the board, in costs, revenue, operations and service to our customers," Tilton said in a statement accompanying the filing.

"Today, we are more flexible, more efficient and more resilient. As a result, United is now positioned to compete with the best carriers and confront the challenges of a volatile industry," he said.

The plan is to be financed by a $2.5 billion, all-debt loan package from Citigroup Inc., JPMorgan Chase & Co., General Electric Co. and Deutsche Bank AG.

The company proposes issuing new common stock in UAL to settle the claims of unsecured creditors, many of whom likely will seek higher amounts. It also said it is exploring the possibility of offering unsecured creditors the opportunity to buy an additional $500 million in new stock, with the proceeds providing extra capital for the company to fund its operations or pay down debt.

Current UAL shares, which the company has long said would be worthless after bankruptcy, will be canceled as soon as the plan takes effect.

UAL proposes Dec. 1 as the final deadline to object to the plan and Jan. 17-18 for final hearings to confirm it.

Along with the 130-page reorganization plan, the company filed a 204-page disclosure statement that includes an analysis of the plan's feasibility in addition to detailing who will be eligible to vote on the reorganization plan and how the vote will occur.

The airline has lost more than $10 billion since 2000. However, the bankruptcy restructuring has given it an advantage over some of its biggest competitors, since it now boasts much lower costs, long-term labor contracts and a slimmed-down, newer fleet of planes than most rivals.

James O'Connor, United's lead director, said the company is vastly different than the one that entered bankruptcy.

"The company has made difficult but necessary decisions and used the time well to restructure the fundamental business," he said. "United now takes another significant step forward to formally begin the process of exiting bankruptcy."