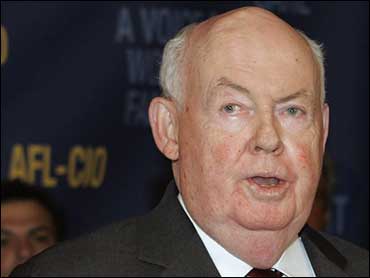 The AFL-CIO and its unions said Friday they will spend an estimated $200 million on the 2008 elections, with the nation's largest labor federation devoting $53 million exclusively to grass-roots mobilization.

In addition, the AFL-CIO said it would deploy more than 200,000 volunteers leading up to the election, with special focus on battleground states such as Ohio, Pennsylvania, Minnesota, Michigan and Wisconsin.

"Today the AFL-CIO is sending a powerful message that we are going to change the course of our country in 2008 by electing a president and candidates at all levels who are committed to restoring the promise of America to working people," AFL-CIO President John Sweeney said.

The announcement came as the AFL-CIO's executive council met at the group's headquarters in Washington to plan the federation's political strategy for the presidential, congressional and state elections next year.

AFL-CIO leaders are looking to put a Democrat in the White House and help that party pick up as many as six seats in the Senate and five in the House. Democrats took control of Congress in the 2006 elections.

"We're going for the trifecta: the House, the Senate and the White House," said Gerald McEntee, the AFL-CIO's political committee chair and president of the American Federation of State, County and Municipal Employees union.

The AFL-CIO and its unions spent an estimated $150 million during the 2004 presidential elections, but Democrats came up short in the White House and their bid for congressional control.

The AFL-CIO has not endorsed any of the Democratic presidential candidates, although it has freed its 55 member unions to endorse whoever they choose.

In 2004, the AFL-CIO spent $50 million almost exclusively on grass-roots mobilization for Democrat John Kerry's losing effort to capture the White House, AFL-CIO officials said. The federation spent $40 million on the 2006 elections in which Democrats regained control of the House and the Senate.

The $53 million dedicated for grass-roots mobilization will be spent on House, Senate and the presidential race, officials said.