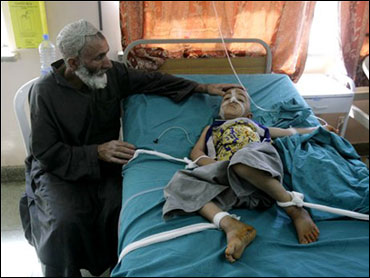 (AP Photo/Allauddin Khan)
Eight years after a U.S.-led invasion of Afghanistan, the country ranks as the worst place to be born, according to a United Nations report.

The United Nation's Children's Fund, better known as UNICEF, says Afghanistan has the highest infant mortality rate in the world with 257 deaths per 1,000 live births, and 70 percent of Afghans have access to clean water.

The nation is especially dangerous for girls, the agency reported as part of its annual State of the World's Children report.

Up to 43 percent of the country is off-limits to agencies seeking to provide aid, UNICEF's regional director for South Asia, Daniel Toole, told Reuters.

"Afghanistan today is without a doubt the most dangerous place to be born," Toole said.