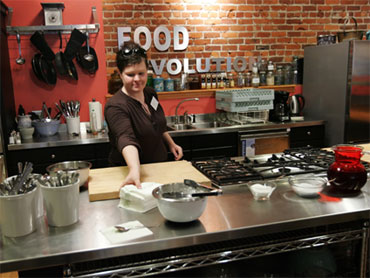 Linda Fillinger had a new experience recently: She made pancakes without reaching for a box of prepared mix.

"I never made it with actual flour before," the Barboursville resident said after finishing a weekly cooking lesson at Huntington's Kitchen. The newly established downtown facility is the most visible sign of the changes here since a celebrity chef came to what his American TV network calls the nation's unhealthiest city.

Even before the evangelist for fresh ingredients and unprocessed foods set foot in town, residents were wary of being subjected to a gawk-and-go treatment that would unfairly single them out in a country where bulging waistlines and junk food diets are common from New York to California.

Instead of closing their eyes and wishing Oliver would go away, though, many people here eventually warmed to the chef, and have started efforts to improve the health of locals residents.

"This isn't just a TV show and it's not just a one-time thing," said Doug Sheils, spokesman for Cabell-Huntington Hospital, which was an early supporter of efforts to change the area's health problems.

Sheils was an early and vocal skeptic of Oliver's effort, and is still seething about a 2008 Associated Press story that used federal Centers for Disease Control and Prevention data to dub the five-county Huntington metropolitan area the country's unhealthiest.

The story pointed out that based on CDC statistics, nearly half the adults in the metropolitan area were obese and that the area led in a half-dozen other illness measures, too, including heart disease and diabetes.

But after meeting Oliver, Sheils became convinced of the Cockney chef's good will, and the hospital has stepped forward with significant donations to two major efforts.

The first is an $80,000 grant to revamp the menus at Cabell County's 28 schools to eliminate processed foods and to serve meals made from fresh, local ingredients.

"The biggest part of that is money to train every single school cook in Cabell County how to cook healthy meals from scratch, so they're not just opening a box of frozen chicken nuggets and warming them up," Sheils said.

The hospital has also donated $50,000 to help Ebenezer Medical Outreach, a local medical clinic, run Huntington's Kitchen, where Fillinger and other pupils were learning to make pancakes with real flour.

Inside the downtown storefront, brick walls, hardwood floors and stylish furniture give the building the feel of a chic coffeehouse. But four heavy-duty cooktops one for the teacher and three for groups of students indicate Huntington's Kitchen is about more than atmosphere.

On a recent afternoon, Jillian Moore, the kitchen manager who was trained in London by Oliver's organization, led a group of about half a dozen in making Spanish-style steak with red peppers and fresh chili.

"We really want the people who come to the classes to take what they learn and pass it on to others," Moore said. "That's a huge part of the revolution."

For the Rev. Ed Atchley, a diabetic who started attending weekly classes to improve his diet, the courses are a revelation not just in preparing food, but in learning about the brew of chemical preservatives and other ingredients that go into food he had gotten used to.

"When I used to go shopping, I'd just throw everything in the basket," he said. "Now I take my time, I read labels, I buy more fruit."

In some ways, despite the talk of revolution and the celebrity endorsement, it's really a matter of discovering old-fashioned cooking, Fillinger said.

"It's like when your grandparents used to cook for you," she said.

Whether this will all be sustained is the important question. Huntington's Kitchen has a year's worth of donated food and the grant from Cabell-Huntington Hospital, which Sheils said is essentially a year of rent and utility payments.

After that, the kitchen will need new grants, and more people paying the $10 weekly suggested donation for classes than are currently doing so.

And state officials have already raised doubts about whether Cabell County's experiment in healthy new menus can be replicated across West Virginia's 55 counties. First Lady Gayle Manchin, a member of the state Board of Education, said at a meeting this month that Cabell schools will have to spend an extra $66,000 next year to keep the program running.

For some people, though, now that the revolution has arrived, there's no going back. Linda Fillinger, for one, will never make a pancake from a box again.

"We always have that bad reputation about being the fattest and the unhappiest," she said. "It's so nice to do something to prove that wrong."
By TOM BREEN