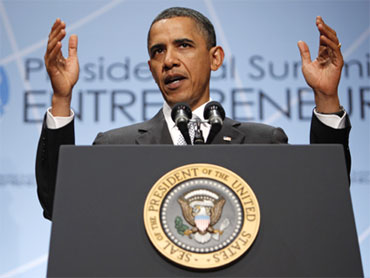 Even as he touts his efforts to put more Americans to work, President Obama faces a public increasingly skeptical of his ability to bring jobs back.

During stops in Iowa, Illinois and Missouri, Obama will try to convince voters that his economic policies are working, despite an unemployment rate that's expected to remain at painfully high levels for months if not years.

Those voters - many of them crucial independents - will be key to Obama's re-election prospects in 2012. And his fellow Democrats, facing a tough political climate in the November elections when control of Congress is at stake, need their support even sooner.

"The bottom line is that the Democrats are almost certain to be campaigning in economic circumstances that will not be politically favorable," said William Galston, a former domestic policy aide in Bill Clinton's White House and now a senior fellow at the Brookings Institution.

Economic Recovery? Maybe, But Not Everywhere

The latest economic forecasts do show signs of progress: The U.S. added jobs at the fastest pace in three years last month; the manufacturing industry is growing at a steady pace; and new claims for jobless benefits have declined.

But the unemployment rate - it may be the most recognizable economic indicator - has held steady at 9.7 percent for the past three months, and 15 million Americans remain out of work. By the White House's own estimates, as well as those of many independent economists, that rate isn't expected to fluctuate more than a few tenths of a percent through the end of 2010.

The president's home state of Illinois, where he'll travel Wednesday, has one of the nation's highest unemployment rates, 11.5 percent.

That's a far different reality than what the administration predicted last year, when Obama rallied support for the $787 billion economic stimulus package. At the time, the White House said the massive infusion of taxpayer funds would keep the unemployment rate from topping 8 percent, though the administration later revised those estimates, saying the recession proved to be worse than they expected.

Though the administration wasn't alone in underestimating the impact of the downturn - many independent economists had similar initial forecasts - Republicans see an opening to attack the administration's handling of the economic crisis.

"The unemployment rate is a far cry from where President Obama and the Democrats said it would be," said Ken Spain, communications director for the National Republican Congressional Committee. "We're constantly going to remind voters that they promised."

Polls suggest the president and his party are increasingly vulnerable on the economy. Democrats and Republicans each have the confidence of 44 percent of people for handling the economy, according to an Associated Press-GfK poll conducted this month. The Democrats had a 9-point advantage just four months ago and have held an edge since AP polls began asking about the issue in 2006.

"The president will get credit for the effort," he said. "But there's still a lot of misery and devastation."

White House officials say that while the unemployment rate is an important economic indicator, it doesn't tell the full story. Since the rate is based on the number of people looking for jobs, it's likely to increase or hold steady as positive economic news leads more of the unemployed to restart their job search.

A more telling sign of the impact the stimulus and other job creation programs have had is the number of jobs gained or lost each month, according to administration officials. As Obama is quick to point out, the economy was losing 700,000 jobs a month when he took office. That number has steadily declined, and in March, there were 162,000 jobs created, the most in nearly three years.

Axelrod cautioned that job growth could be choppy over the coming months. And even though the economy is growing again, the slow pace means the 8.4 million jobs lost since the recession began in late 2007 are unlikely to come back quickly.