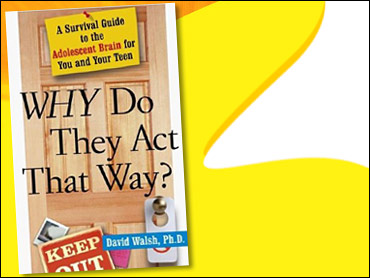 Shouts of "You don't understand!" and doors slamming are part of life when there's a teen in the house. In a recent study, only 47 percent of American teens think that adults like and respect them.

Psychologist David Walsh says this behavior is understandable and even normal with all the changes taking place in the adolescent brain. He writes about these changes in his new book, "Why Do They Act That Way?" And he talks about it on Monday's The Early Show.

Kids are becoming physically mature at younger ages, and they don't take on adult roles as early as previous generations, Walsh notes, and cautions parents not to take what seems to be anti-social behavior personally or think their teens are doing something to "press your buttons."

Not surprisingly, communication is a key ingredient to managing your adolescent.

So how can you avoid power struggles and battles when misinterpretation is very likely to happen?

Walsh has some the following ideas:

What are the behaviors that will encourage talking? Walsh says that as parents (adults) we have to be careful to not to interrupt.

He says, "We always want to straighten them out. We get so anxious, particularly when they make extreme statements like 'I hate my life,' all you as a parent want to do is correct her. When you correct your teen, the teen believes that you're not listening to what they are saying. It's far better to 'mirror' what we're hearing. If you mirror back what they say, your teen will think 'mom and dad are interested in what I'm saying.' And, that keeps the communications open."

Parents frequently say that their teen won't tell them with anything. Walsh believes your adolescent will talk with you, but you have to learn new ways to ask the questions.

He says, "Sometimes, we make it easy to give a one-word answer. Instead of 'Did you have a good day at school today?' say, 'Tell me about your day.' They can still blow you off, but the second question makes it harder." Walsh wants parents to get in the habit of doing things that encourage your teen. Don't correct so much. Don't interrupt so much and frame questions so they encourage, not discourage.

Walsh also suggests that identifying with the teen is a good technique. Try to remember what it was like to be that age. He models, "If I were in your shoes, I'd be disappointed. I know there's a big party this weekend, but we have to go to this family wedding. I can understand how you'd rather go to your party and I don't blame you for being upset." Walsh further suggests acknowledging that the teen is making a sacrifice and maybe they could make a deal to make up for what the teen is missing. "You're making a sacrifice. What could we do to make up for that disappointment?"

Walsh is concerned that parents not give up on their kids. He believes that parents must insist that kids participate in family rituals. "We make a big mistake if we let them out of the family rituals. It's another way of kids asking for a divorce and parents can't give the kids a divorce." Kids and their parents need to stay connected, no matter how much grumbling goes on with the teens.

It's important to find new ways to connect with the kids. If you and your teen are having a difficult time connecting, then he advises making sure there are other adults who can be involved in the kids' lives. Kids need to know that there are adults in their lives who they can connect with.

"Why Do They Act That Way?" is published by the Free Press, an imprint of Simon and Schuster, which is owned by Viacom, the same parent company as CBS.