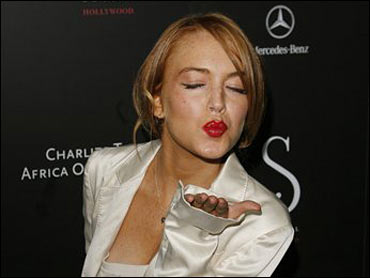 Hollywood's hottest, trendiest nightclubs — they pop up almost as fast as the hair extensions Britney Spears used to attach to her head, and they can disappear just about as quickly as Spears' real hair did.

But whether it's the Mood, where a bottle of booze can set you back several hundred dollars, or the hyper-exclusive Teddy's, where "Pirates of the Caribbean" star Orlando Bloom recently celebrated his 30th birthday, this year's most mega-happening nightclubs have the same thing last year's did — a line of hot, young celebrities being ushered past the velvet ropes that keep everybody else out.

Once inside, many of them will belly up to the bar, including it turns out, some not old enough to do so legally.

"Everybody knows it's happening," says Harvey Levin, managing editor of the celebrity Web site TMZ.com, which in the past year has posted photos of such underage stars as Lindsay Lohan and Jesse McCartney partying at Hollywood clubs.

"Young, hot stars and starlets attract big crowds and big crowds mean big money for these clubs," said Levin, adding that pressure to remain the hottest place in town can tempt some to break the law.

"When clubs lose heat, they die," Levin continued. "How do you keep heat? Keep the stars coming. Sometimes they're underage, but you let 'em in if there's no consequences."

Some have begun to face consequences, however, due in part to incidents like last weekend's DUI arrest of the 20-year-old Lohan and photos like the one TMZ.com posted last year of McCartney, then 18, holding a Corona beer bottle at a Hollywood club.

"We've had an increased number of complaints, well over what we had a year ago," said California Alcohol Beverage Control Board spokesman John Carr.

As a result, his agency has launched nearly a dozen undercover operations at clubs in recent months. Teddy's and Mood, both widely regarded as among the hottest L.A. venues of the moment, were busted.

Teddy's, whose sightings have included Sean "Diddy" Combs and Paris and Nicky Hilton, among numerous others, paid a $3,000 fine for serving alcohol after hours last year, Carr said. The club has taken to carding even people it is certain are over 21, said Med Abrous, its director of promotions, and refusing to serve anyone who is drunk.

The alcohol board, meanwhile, is seeking a 15-day closure order against Mood for allegedly serving an underage drinker. The club's lawyer, Stephen Solomon, said Mood was fooled by a 20-year-old non-celebrity who used a legitimate-looking fake driver's license to get in the door of the 21-and-over club. The woman was never served a drink, according to the lawyer, who said he expects Mood to prevail at a hearing.

Not that wild Hollywood nightclub behavior is anything new. The Viper Room was the hot club of the moment in 1993 when 23-year-old actor River Phoenix died of a drug overdose outside its front door on Halloween morning. Musician Chuck E. Weiss, who was a part-owner at the time, said he got out of the club business largely because of that incident.

In those days, Weiss noted, pretty much anything was allowed in the club's small, celebrity-filled VIP room. "But that's something I'd rather not comment on," he added.

In 29 years of running the Laugh Factory, Jamie Masada says he has seen everything from fake I.D.s to blustering celebrities insisting it doesn't matter that they're only 19 or 20.

Still others, he said, will have older members of their entourage order drinks and pass them on, including one he declined to name who Masada said had her publicist pass her a drink in the restroom.

Masada and others, including Nic Adler, owner of the venerable music venue the Roxy, with its famous upstairs celebrity club On th Rox, said owners have a responsibility to see their patrons don't drink to excess or that minors aren't served.

"We've all been battling underage ever since the beginning of clubs," said Adler, whose father, fabled music mogul Lou Adler, opened the Roxy in 1973. "These young girls dress up and you don't know what age they are."

At the same time, clubs feel the pressure to cater to celebrities who will drop hundreds of dollars on a bottle of wine if they can sit at a special table and drink it with friends, as well as the hordes of other people they will bring out who hope to get past the velvet ropes and spend a few hours rubbing shoulders with them.

"Rich, powerful, sexy" are what's needed to get in the club of the moment if you aren't famous, said veteran Hollywood publicist Michael Levine. Either that, he said, or be an extremely attractive woman.

"Hot women do not have to pay attention to the normal traffic lights of life in nightclubs," he said with a laugh.

"I can tell you that we handle celebrities different," former House of Blues manager Arich Berghammer testified recently at the murder trial of Phil Spector. He had been asked if the music producer or other famous people received special treatment at the club's Foundation Room, including allowing them to drink to excess or drink after hours.

Spector had left the Foundation Room with hostess Lana Clarkson hours before Clarkson was found shot to death in his home.

Asked what impact it would have on the club if drunken celebrities were consistently refused service, Berghammer replied, "It would be devastating."