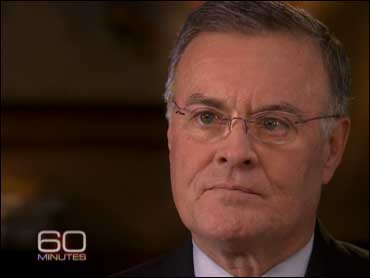 Banks are supposed to lend money, and when they stop - as they have in recent months - the workings of our entire economy are threatened. Credit became so frozen, the government had to step in this past week and take an ownership stake in the country's biggest banks.

On Monday Treasury Secretary Henry Paulson summoned the CEOs of the nine largest banks to Washington - and gave them a massive amount of money so they would start lending again.

The largest of the banks is Bank of America (B of A) - now partly owned by the United States of America.

The head of Bank of America, Ken Lewis, says that when he and the others met at the Treasury Department, it became clear that Secretary Paulson's "offer" was an ultimatum - no negotiations.

"In other words, take it or leave it?" correspondent Lesley Stahl asked.

"It's said that he told the bankers and you, "This is your patriotic duty," Stahl said.

"Did you feel that? Was that a persuasive line of argument?"

"Absolutely," Lewis said. "I deeply believe that. I think he was right on."

"Now explain, why was it so important to the government that everybody agreed, that the nine largest banks are ALL in this?" Stahl asked.

"If you have a bank in that group that really, really needed the capital, you don't want to expose that bank," Lewis said.

"In other words, stigmatize it."

"So everybody knows that they're not as good as somebody else."

"Most of you were just stunned by the amount of money that the government put on the table," Stahl said.

"Yeah," Lewis replied. "At least I was. And I think most everybody else was."

The total was $125 billion of taxpayers' money. Bank of America, Lewis says, didn't need the money … but got $25 billion anyway.

"Do you have any choice in this?" Stahl asked. "In other words, can you take the money and not lend?"

"We wouldn't want to do it that way, because you can make more money lending," Lewis said, "and so the intent will be to use it to grow loans and to make more net income."

But under the Treasury's plan, there's no requirement that a bank use the money to lend. It could use it to acquire weaker competitors - or put it in Treasury bills.

One of the few strings Secretary Paulson attached relates to salaries. A bank would have to pay more taxes if it paid an executive over $500,000 a year.

One of the bankers in the meeting objected, and started arguing with Paulson - and that's when Ken Lewis, a critic of excessive executive compensation, spoke up:

"I did make the point that we needed to stop talking about executive comp and get on with this because that should not stop the deal."

"Actually, you're quoted as saying, 'If this is what's going to stop this, you're out of your mind,'" Stahl said.

"Because why? Because you thought if it got out publicly … ?"

"No, that the importance of this deal getting done versus these elements of executive comp were just out of sync," Lewis said. "I mean, this was so much more important. And all of us can take a little less money."

With his salary and lucrative stock and options, Lewis took home $25 million last year. But he's one of the few in the business who can be fired without a golden parachute, and he thinks executives on Wall Street have made too much money.

"I think they were overpaid,' he said. "It's more egregious in financial services than any other industry that I know of. We need to cut back compensation in this industry."

"So this is a question everybody wants answered: Is this Socialism?" Stahl asked. "Have we now taken a huge step away from the free-wheeling Capitalism that we've known for the last 30 or so years?"

"I don't know what we'll call it, but it will be different," he said. "And there will be more regulation. The Golden Era of financial services is over, in my opinion."

"But why isn't it Socialism, if the government starts owning our banks?" Stahl asked.

"That will not last forever; we will pay off the preferred stock at some point, and come back to not being owned partially by the government."

"Can you give us what your sense of how long it's going to take?"

"Yeah, I think somewhere between 3 and 5 years, we'll pay it off," he said. "And then you go back to, more toward Capitalism."

"It's said that one of the main reasons the [Bank of America] is doing well is because of your decision not to get into sub prime mortgages," Stahl said.

"In 2001, my first year as CEO, we decided that we just didn't like the business. It was too risky. And so we decided to get out of it."

He makes it sound like a routine decision, but getting out of most of the financial products that brought Wall Street crashing down was significant. And now Lewis runs one of the country's healthiest banks, which just keeps growing.

"We saw the strongest growth in deposits in the 3rd quarter we'd ever seen in our history," he said.

He told us that during this crisis, people are taking their money out of other banks and putting it in his.

"We bank every other American family, you know, in America," Lewis said, with Bank of America doing business with half of all families in the U.S. covering via credit cards, auto loans, deposits and checking accounts.

The way B of A accomplished this was by buying the number one company in virtually every category of banking.

For instance, it bought Countrywide in mortgages, and MBNA in credit cards. Now it's a nearly $3 trillion dollar conglomerate, the WalMart of banking.

And the biggest bank in America is headquartered not on Wall Street, but 600 miles south, in Charlotte.

"Some people don't even know what state Charlotte's in, whether it's North or South Carolina," Stahl said. "Am I insulting you?"

"No, in fact, I always say 'Charlotte, North Carolina, just so they don't have to ask the question!" Lewis laughed.

Not surprisingly, B of A seems to own Charlotte - and the town grew with the bank.

B of A started out as a relatively small, regional bank.

"Well, we didn't like being small," Hugh McColl (who was the bank's CEO before Lewis) told Stahl. "I mean, there's nothing really attractive about being small."

McColl set out to expand the bank's reach from coast to coast and make Charlotte a financial powerhouse.

"I think we have this sort of Southern underdog of wanting to be masters of our own fate, and not be dependent on northern capital," he said.

"When you were growing, and you'd go to New York, did they not treat you well?" Stahl asked. "Did they treat you like, sort of, the country bumpkins?"

"I guess when I was a young man, I always felt a little uncomfortable in New York," McColl said.

"This uncomfortable feeling - that they weren't respecting you - did you have it in your head, 'I'm going to conquer New York'?"

"Well, that would overstate New York; I was more interested in America," McColl replied.

"Did you really think that you could overtake Wall Street?" Stahl asked.

"Well, have you ever played tennis? Once you size up the competition and decide whether you can beat 'em or not, hey - I thought I could."

The crowning victory came last month when Wall Street's most famous investment houses were collapsing under the weight of their toxic portfolios and needed rescuing. They went hat-in-hand … to Charlotte, North Carolina.

"I had talked to Secretary Paulson that Friday,' Lewis said. "And basically said we didn't think we could do the deal without government assistance."

"With Lehman. That we couldn't do it without some help. And then about 10:30, John Thain called."

It was Saturday morning, September 13. John Thain, the CEO of Merrill Lynch, was on the line. Lehman was on its death bed; Merrill Lynch was said to be next.

"We've always thought that was the best thing for us," Lewis said.

"You were drooling for Merrill Lynch," she said.

"We have always felt it was."

Deals of this magnitude take months of due diligence and vetting. This deal was thrown together over a weekend, with Bank of America spending $50 billion to buy one of Wall Street's emblematic companies.

But now B of A is exposed to Merrill Lynch's poisonous investments and continuing losses.

The question is: Did Ken Lewis pay too much?

"Some think that we should've waited till Monday and see if they would've gone bankrupt," he said. "Some think we would've gotten it for, you know, dirt cheap. But my point is, you would have a tarnished brand. You would've had chaos. You would've had a court ruling over all the sale of assets. And it was worth it to us to pay a more market price so that we could not have that happen."

So what about Merrill's 17,000 brokers? Lewis has said their salaries are too high …

"Is New York going to lose a lot of jobs, do you think?" Stahl asked.

"I don't think a lot," Lewis said. "I mean, obviously, we have to, we've got $7 billion of cost savings to get, and so, that means that there will be jobs eliminated."

So the government's rescue isn't helping everyone on Wall Street.

What about Main Street?

"Has the lending started? Did this jumpstart lending again?" Stahl asked.

"It should. It's only been a few days, obviously. And it will make a big difference."

"It will? We're sitting down with you Wednesday. The market is, at this moment, going down again."

"Right. The market's going down and what's worrying me is the fact that we had, we've gotten the financial system in much, much better shape. But the economy is still a question mark. And we are in a recession by any standard other then maybe some technical standard. It feels like a recession. And we think it's gonna take some time before, you know, it gets better."

"Bank of America's the largest mortgage lender in the country. So when do you think the housing problems are going to bottom out?"

"Our best guess now is that toward the end of the first half of next year, we'll start to see signs, either signs of bottoming or the actual bottoming."

"What about credit card debt?" Stahl asked. "Is that going to be the next shoe to drop?"

"It, in some ways, already is. Because credit card losses have risen pretty substantially."

"Do you think your job is secure?" Stahl asked.

Lewis laughed. "I've not … I must think that, because I don't think about that question."

"That doesn't enter your mind?"

"Did you defeat Wall Street?"

"And if the idea was to compete with New York or Wall Street, you won."

"We have, yes, we have won in that sense."
Produced by Shachar Bar-On