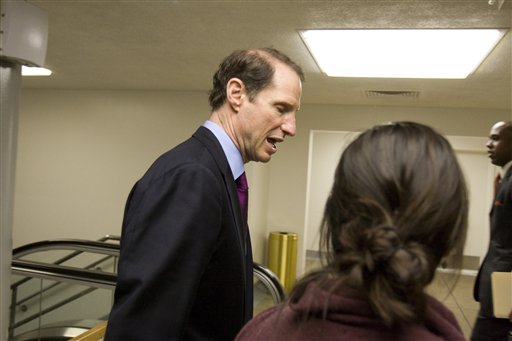 All eyes are on Maine Republican Sen. Olympia Snowe as health care legislation heads for a high-stakes committee vote next week. But she's not the only senator who is being noncommittal.

"I am not going to characterize where I am (on the bill) in any way," Wyden said Friday as he headed to the airport for a trip back to his state.

"I'm going to be doing everything I can to make sure hardworking Americans aren't forced to buy unaffordable coverage from monopolies," he added, making his discomfort clear.

For Wyden to be on the fence is an odd turn of events. He's been calling for an overhaul of the nation's health care system for years. He wrote the Healthy Americans Act, a bill that won bipartisan support.

Not only that, his bill got a coveted appraisal from the Congressional Budget Office that it would cover all Americans without adding to the deficit. Instead of creating a new government health plan, it would force private insurers to compete with one another as they've never had to before.

While economists judged Wyden's approach to be an elegant solution, President Barack Obama and Democratic leaders decided that politically, it went too far. It would have loosened the link between health insurance and the workplace, and shifted many Medicaid recipients into private coverage.

Wyden's plan has been pushed off to the sidelines, and he's now trying to decide where he belongs. The Baucus bill, as he sees it, limits choice, falls short on cost control, and fails to meet the test of providing affordable coverage for all Americans _ particularly solid middle-class families headed by a self-employed person.

Democrats have a 13-10 advantage on the Finance Committee, so Baucus, D-Mont., doesn't need Wyden's vote to pass a bill. But Wyden's dissent would send a message. A liberal on social issues, he's seen as middle-of-the-road on economic matters.

"It would be both troublesome and ironic if Sen. Wyden voted against this legislation," said Ron Pollack, executive director of Families USA, a liberal health care advocacy group. "He has been an outspoken leader in promoting the need for health care reform, and a negative vote would defeat the very objectives that the senator has promoted."

Finance member Sen. Debbie Stabenow, D-Mich., said Friday in a call with reporters there is only one Democrat who has not indicated how he will vote.

Wyden said his aides will be talking with Baucus's staff during the weekend. He is positioning himself for a floor debate in which he's expected to offer a version of his original bill.

"My take is that this cake is far from baked," Wyden said.