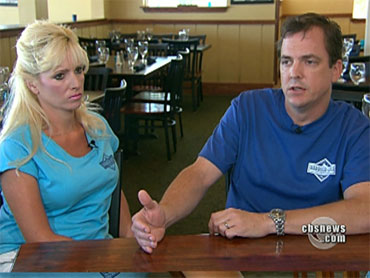 In the summer months, Orange Beach, Ala. should be bustling. This town's 5,300 residents depend on their almost $2 billion dollar beach industry.

But the oil washing up here is threatening to suffocate local businesses.

"You make a living off tourists in this town," Regina Shipp tells Katie Couric. "And if there's no tourists, how do we make a living?"

Regina and Matt Shipp own the Shipp's Harbour Grill. They moved their family from Mobile and opened their dockside dining room in Oct. 2009. At first, the $2.5 million business was booming.

"This time of year, we would serve four to give hundred people," says Regina.

And since the spill?

"Less than half," says her husband Matt. "Last night, we probably had fifty or sixty people last night. We should have been doing several hundred."

Fearing the numbers would only get worse, Matt and Regina Shipp have filed a claim with BP on April 30.

"BP is saying all claims will have an adjustor within give to seven calendar days," says Matt Shipp. "And it's been just one process after another."

So far they've received only one $5,000 check from BP - less than half of one month's rent on the restaurant.

To stay afloat, they've had to let five employees go and cut the rest of their staff down to two days a week.

It wasn't until CBS News connected Shipp with a representative from Unified Command, that he finally got an appointment with his adjustor.

Meanwhile, a hundred feet away, a charter boat captain wondered what to do about his boat - now being coated with oil washing into the marina.

Capt. Marshall "Mo" Shaver had a lucrative charter fishing company and a $100,000 bait and tackle shop across town -- a business he had hoped to one day to pass on to his son, Stone, 2.

And now that all inland waters have been closed to fishing boats for at least four months, his only option was to use his boat to help with the clean-up effort in the gulf.

Initially, Shaver resisted using his boat to assist with in the clean-up effort.

"I fish for a living. I own a bait and tackle shop for a living," he said. "That's what I want to do and what I wanted to hang in until the bitter end."

But the "bitter end" came too late.

When he tried to sign up, he was told all available slots had already been filled.

He believes that people are taking advantage of this crisis.

"People from all over the region, they've got jobs at home and jobs now with BP," he said. "Whereas I have guys working for me that can't make a living right now."

At the BP claims center, CBS News' cameras weren't welcome, when Matt Shipp was trying to check on his latest claim.

In the end, he was offered about half of his initial request, which may not be enough to save the summer.

"Can we come back next year? Absolutely, if the beaches are clean. And the oil has gone away," he says. "But is that going to happen? I don't know."

Shaver tries to remain optimistic in the face of catastrope.

"It breaks my heart to see my hometown go to this," he said. "But I feel that we're resilient people. We'll go to work doing whatever we need to do to survive."