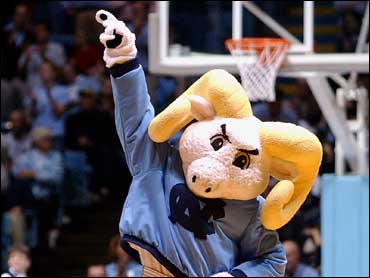 Jason Ray, the University of North Carolina student who suits up as the school's mascot, died Monday two days after being hit by a car in New Jersey where had planned to attend the Tar Heels' NCAA basketball game at the Continental Airlines Arena.

The 21-year-old senior was struck near his hotel in Fort Lee, while walking along a busy highway leading from the George Washington Bridge. Ray was one of three students who portrayed UNC's ram mascot, Rameses.

Ray's father, Emmitt, who flew to New Jersey in a friend's private plane after getting word of his son's life-threatening head injuries, had said doctors held out little hope for his son's recovery "short of the intervention of the Lord."

Ray left his hotel to go to a nearby convenience store Friday afternoon for a burrito and a soda, and was walking back along Route 4 when he was struck from behind by an SUV. The driver stopped immediately to call 911. No charges have been filed.

"We've known Jason since he was 11 years old — he is an awesome kid," said Jodi Stewart, a neighbor of the Ray family who attends the same church in Concord, N.C. "I never knew a kid who was more full of life. He was excited every day. He loved what he was doing, he loved God, his family, and being the school's mascot."

A group of about 40 people attended a prayer session held on the University of North Carolina at Chapel Hill campus Sunday afternoon, said Laura Ely, a UNC senior who met Ray early in their freshman year. She described Ray as "an amazing person" who had a large, diverse group of friends at UNC and other nearby schools.

Stewart said about 30 of Ray's family and friends were at Hackensack University Medical Center Sunday, including his parents, Emmitt and Charlotte Ray, two brothers, and five high school friends who lived with Ray in Chapel Hill, N.C.

Stewart said Ray was an Eagle scout and was involved in his church. While in high school at Jay M. Robinson High School in Concord, Ray was often seen cheering in the stands at basketball games, she said.

Ray's dad told The Star-Ledger that his son "absolutely loved" dressing up as Rameses, despite the costume's bulk.

"It was his way of supporting the team," Emmitt Ray said. "There are things you just can't explain. He just happened to be in the wrong place at the right time. He wasn't doing anything he wasn't supposed to be doing. He was 200 yards from the hotel."

Police said Gagik Hovsepyan, 51, the driver who hit Ray, had a valid driver's license and did not appear to be under the influence of alcohol or drugs. His son was asleep in the SUV at the time, police said.

At 6-foot-5, Jason Ray was such a commanding presence that when UNC coach Roy Williams first met him in the campus gym, he wondered aloud why Ray wasn't on his team.

"I'm too slow and I can't jump," Jason told Williams. "But I can be of assistance in other ways, Coach."

Ray had been scheduled to graduate in May with a 3.6 GPA, majoring in business administration with a minor in religion. He had a sales and marketing job lined up in nearby Raleigh, N.C.