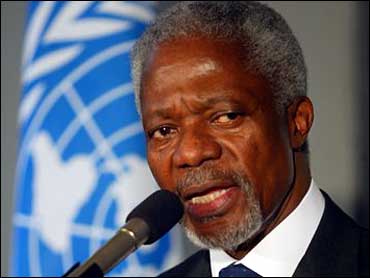 "Mr. Stephanides was advised accordingly yesterday and was separated from service with immediate effect," Dujarric said.

"The Secretary General is making of point of cleaning up shop as soon as he has evidence of wrongdoing," said CBS News Foreign Affairs Analyst Pamela Falk from the U.N. "The Stephanides case was presented in March and time was given for him to present his defense."

"But time will tell if taking the reins will clear the Secretary General himself in the intense Senate and Department of Justice investigations," added Falk.

Stephanides rejected the charges and said he was confident the firing would be overturned. He said he planned to appeal.

"I am very disappointed by this decision," Stephanides told The Associated Press. "I look to the appeal process in the confident hope that justice will be made and I will be exonerated because I have committed no wrongdoing."

Stephanides had worked for the United Nations since 1980. He said he had planned to retire in September when he turned 60, the mandatory retirement age.

Action against former oil-for-food chief Benon Sevan has been suspended until Volcker's probe finishes its work because he is still a target of the probe. Sevan was accused of a "grave conflict of interest" in soliciting oil deals from Iraq.

And Dileep Nair, the now-retired chief of the U.N. watchdog agency, had allegedly paid an employee with money from the oil-for-food program although the staffer's work was not directly tied to it. Annan sent a letter expressing disappointment but took no action.

Stephanides, head of the U.N. Security Council Affairs Division, had been accused of tainting the competitive bidding process for a company to inspect humanitarian goods entering Iraq under the program.

His contacts with an unnamed U.N. mission — which a U.N. committee acquiesced to for political reasons — led to Lloyd's Register Inspection Limited winning the contract even though there was a lower bidder, it said.

Annan has dismissed 40 staff members including Stephanides since becoming secretary-general in 1997, Dujarric said.