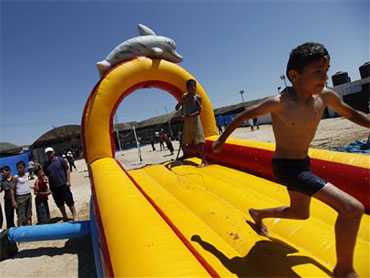 Masked men trashed a U.N. summer camp Monday, tying up guards and slashing tents and an inflatable pool in the second such attack blamed on suspected extremists in just over a month - a sign of how, in Gaza, youth camp is not just about crafts and volleyball.

Rival day camps by the United Nations and Gaza's Islamic militant Hamas rulers compete for the hearts of the next generation, the roughly 700,000 children under 15 who make up nearly half of the Gaza Strip's population.

Hamas camps teach an anti-Israeli doctrine and military-style marching, along with horseback riding, swimming and Islam. U.N. camps try to instill hope in a better future, a message wrapped in fun and games.

"When U.N. relief agencies become the target, it is always a sign that the situation has deteriorated and extremists are on the rise," said CBS News Foreign Affairs Analyst Pamela Falk from the U.N. Monday. "And when a summer camp for children is caught in the crosshairs, it is particularly tragic."

The U.N. says it hopes to help shield Gaza's children against the lure of militancy, a task that's getting harder in the impoverished territory. Educators say today's children are more vulnerable than the previous generation, having witnessed war with Israel last year, internal Palestinian fighting and the violent Hamas takeover in 2007, followed by an Israeli-Egyptian blockade that has virtually cut Gaza off from the outside world.

"Time is against us," warned local U.N. chief John Ging. "We are losing an entire generation."

The U.N. Secretary-General's office released a statement about the attack.

"The Secretary General condemns the vandalism last night by masked armed men of an UNRWA summer games facility in the Gaza Strip. He is very concerned that this is the second such incident in a month. Such attacks are an assault upon the well-being of Gaza's children, 250,000 of whom attend UNRWA's summer games for recreation and education as well as a respite from the difficulties of everyday life in the Strip.

The Secretary-General calls upon the de-facto authorities to combat any incitement against United Nations operations, and ensure the safety of UNRWA and other UN personnel and programmes, serving the most vulnerable in Gaza. He calls for those responsible for these incidents to be brought to justice."

In Monday's vandalism, two dozen masked men broke into a U.N. camp before dawn, while children were not present. They tied up four guards, then slashed and burned tents, toys and a plastic swimming pool.

Hamas police condemned the attack and there was no claim of responsibility.

However, Islamic extremists, including a Hamas legislator, have accused the U.N. in the past of corrupting Gaza's youth, objecting to camp activities such as folklore dancing. A number of Islamic groups more militant than Hamas have carried out violence in the territory in the past few years.

Hamas is also becoming more assertive in imposing its strict version of Islam on daily life in Gaza. It has ordered male coiffeurs out of women's salons, and teenage girls are under intense pressure from teachers to wear headscarves and robes in government schools.

For now, Hamas has largely avoided confrontation with Ging's U.N. Relief and Works Agency, well aware of how vital it is to the lives of impoverished Gazans. UNWRA runs schools, clinics and food centers for two-thirds of Gaza's 1.5 million people.

The U.N. agency stays clear of Hamas, internationally shunned as a terror group.

Hamas says some 100,000 youngsters have signed up for its camps, compared to about 250,000 registered for the U.N. program. Both types of camps are free, and are arranged by age groups.

The U.N. camps run for two weeks each, for schoolchildren through ninth grade. Hamas camps offer 10 days of activities for children and teens from first grade through high school. There are also smaller, private camps - one nonpolitical day camp where students try to memorize sections of the Quran, for instance, has drawn about 20,000 children.

While Hamas and the U.N. may use the opportunity to get their ideas across, the motive for many Gaza parents and youngsters in turning to the camps is the same as that of families around the world: The camps break up an otherwise tedious summer.

The problem is particularly acute in Gaza, which offers few diversions. Families tend to be large, many homes are crowded and kids are often sent into the streets by stressed parents. Frequent power cuts make idle days more miserable.

Mahmoud Migdad, a 15-year-old from the Shati refugee camp, says he often gets yelled at by neighbors for playing football in the streets and gets kicked out of the house by his older sisters when they want to clean. He says that's why he's not only joined a Hamas camp, but is also trying to sign up for the U.N. program.

On a recent afternoon, at one of the Hamas youth camps near Shati, dozens of elementary school students took turns riding horses, swimming in the Mediterranean, sailing in a fishing boat and learning the choreography of Muslim prayer.

After the children recited Quranic verses, a camp supervisor gave a brief lecture.

"We have two aims in our camps, our prisoners and al-Aqsa," said the man, referring to Islam's third holiest shrine, in Israeli-ruled east Jerusalem, and the more than 6,300 Palestinians held by Israel. "First we must free the prisoners, and then also al-Aqsa."

"Where is al-Aqsa?" he asked. "In the hands of the occupation," the children responded.

"Who is the occupation?" he asked. "Israel," they responded.

"Where are the prisoners?" he asked. "In the hands of the occupation," they said.

Each camp is dedicated to a Hamas prisoner, and a large banner with the photo and name of this camp's patron, Mahmoud Nimr Shaheen, was draped over the entrance. Shaheen, an aide to a Hamas militant leader, was released this month after serving 18 years.

Asked what he knows about the camp's patron, 12-year-old Tareq al-Ghoul said, "He was in prison because he fought for us."

After the lecture, the boys lined up outside the tent and practiced marching in formation, to the singsong of a drill sergeant, shaking their fists to shouts of "Allah."

Ahmed Yousef, a representative of Hamas' more pragmatic wing, denied the children were being indoctrinated. He said the emphasis on religion meets the demands of a conservative society.

However, Hamad al-Raqoub, a Hamas official involved in the camps, said their aim is also to forge a generation "that will lead the liberation of Palestine from the Israeli occupation regime."

At a U.N. camp, the atmosphere was more laid back.

Three boys rehearsed a skit with an anti-smoking message. Others splashed in a water tank. Crafts projects were on display. "We need to be hopeful to bring about real change," read one of the cheerful signs posted on tent walls.

Life skills are part of the program, and the day's lesson was about human rights, a topic also taught in U.N. schools. The boys quickly shouted out the answers to the instructor in their circle. The right to be healthy, said one. The right to play, added another.

One eager participant, Abdel-Hamid Ashi, said he loves going to camp, like most of the boys in his neighborhood. Most don't care which camp they attend, added the 13-year-old.

"They just want to have fun."