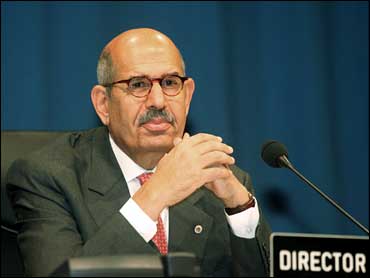 Invoking the war in Iraq, the chief U.N. nuclear inspector criticized talk of attacking Iran as "hype" Monday, saying such options should only be considered as a last resort and only if authorized by the U.N. Security Council.

"I would not talk about any use of force," said Mohamed ElBaradei, the head of the International Atomic Energy Agency, in an indirect response to French warnings that the world had to be prepared for the possibility of war in the event that Iran obtains atomic weapons.

Saying only the U.N. Security Council could authorize the use of force, ElBaradei urged the world to remember Iraq before considering any similar action against Tehran.

"There are rules on how to use force, and I would hope that everybody would have gotten the lesson after the Iraq situation, where 700,000 innocent civilians have lost their lives on the suspicion that a country has nuclear weapons," he told reporters.

He was alluding to a key U.S. argument for invading Iraq in 2003 without Security Council approval - that Saddam Hussein had weapons of mass destruction, including nuclear arms. Four years later, no such arsenals have been found.

ElBaradei, speaking outside a 144-nation meeting of his agency, urged both sides to back away from confrontation, in comments addressed both to Iran and the U.S.-led group of nations pressing for new U.N. sanctions on Tehran for its refusal to end uranium enrichment.

"We need to be cool," he told reporters, adding: "We need not to hype the issue".

On Sunday, French Foreign Minister Bernard Kouchner warned that the world should prepare for war if Iran obtains nuclear weapons and said European leaders were considering their own economic sanctions against the Islamic country.

Negotiations and two sets of U.N. Security Council sanctions have failed to persuade Iran to stop its uranium enrichment program, a process that can produce fuel for nuclear power plants as well as material used in atomic weapons.

Iran insists its atomic activities are aimed only at producing energy, but the U.S., its European allies and other world powers suspect Iranian authorities of seeking nuclear weapons.

Kouchner, speaking on RTL radio, said that if "such a bomb is made... We must prepare ourselves for the worst," he said, specifying that could mean a war.

The United States also has refused to rule out the possibility of force against Iran if it continues to defy Security Council demands on enrichment. Still, Defense Secretary Robert Gates said Sunday the U.S. administration is committed, for now, to using diplomatic and economic means to counter the potential nuclear threat from Iran.

"I think that the administration believes at this point that continuing to try and deal with the Iranian threat, the Iranian challenge, through diplomatic and economic means is by far the preferable approach. That's the one we are using," the Pentagon chief said.

Iran does not directly figure on the agenda of the IAEA general conference, which opened a five-day meeting Monday. But comments, both inside and outside the plenary hall, reflected the world's concerns over Tehran's nuclear aims.

In comments alluding to the U.S. and its Western allies, Iranian Vice President Reza Aghazadeh accused unnamed countries of forcing the international community onto the "unjustified, illegal, deceptive and misleading path ... by imposing restrictions and sanctions."

And he again ruled out scrapping Iran's uranium enrichment program, telling delegates Iran would "never give up its inalienable and legal right in benefiting from peaceful nuclear technology."

ElBaradei, architect of a recent pact with Tehran committing it to stop stonewalling his experts and lift the shroud of secrecy on past suspicious nuclear work, defended the agreement against criticism it could be used by Tehran as a smoke screen to draw attention from its defiance of the Security Council.

"What we need to do is encourage Iran to work with the agency to clarify the outstanding issues," he said.

"I do not believe at this stage that we are facing a clear and present danger that require we go beyond diplomacy," ElBaradei said, said, adding that his agency had no information that "the Iran program is being weaponized."