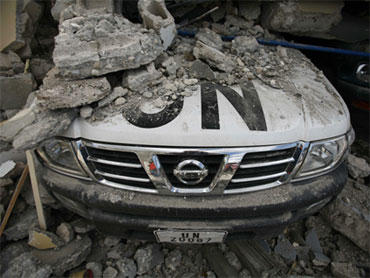 The U.N. says 14 U.N. personnel were killed when an earthquake decimated Haiti's capital and 150 are still unaccounted for, including the mission chief.

U.N. officials say 56 others were injured; seven who were seriously hurt have been evacuated from the country.

U.N. peacekeeping chief Alain Le Roy told a news conference Wednesday that the fatalities include 13 peacekeepers — 10 Brazilians and three Jordanians — and a Haitian civilian working for the U.N. peacekeeping mission in the country.

He stressed that these were only confirmed fatalities and the number of U.N. dead "at the end will be much higher — it's obvious."

Among those unaccounted for is the mission chief, Tunisian diplomat Hedi Annabi.

Secretary-General Ban Ki-moon said Tuesday's "catastrophic earthquake" has devastated the capital of the Western hemisphere's poorest country and the death toll "may be in the hundreds or even thousands."

Most of those unaccounted for were in the headquarters building. But staff members from the U.N. Development Program are also still missing, and UNDP chief Helen Clark said 10 are believed to have been in the building adjacent to the agency's main office, which collapsed.

U.N. humanitarian chief John Holmes told a news conference early Wednesday afternoon that there is an urgent need for search and rescue experts and dogs.

A team from China has already arrived, two U.S. teams are due later Wednesday and more are expected on Thursday, he said.

"Every hour counts in this situation where people are trapped under rubble," Holmes said. "This is a major humanitarian crisis and the needs are going to be very great."

Holmes said the U.N. will be issuing an emergency appeal for Haiti in the next two or three days and urged countries to donate medical supplies and equipment, clean water, food and shelter materials.

Peacekeeping chief Le Roy would not confirm French Foreign Minister Bernard Kouchner's report that everyone in the headquarters building, including mission head Annabi, appeared to have died in the earthquake.

The U.N. chief said Annabi was meeting with a Chinese delegation at the time of the magnitude 7.0 earthquake on Tuesday, and all are still unaccounted for.

The secretary-general said he was sending Assistant Secretary-General for Peacekeeping Edmond Mulet, who previously headed the Haiti mission, to Port au Prince "as soon as possible" to oversee the U.N. rescue operation and help manage the mission.

Le Roy said the U.N. thinks only "a very small number" of peacekeepers were killed because their buildings did not collapse.

"In Port au Prince we have now 3,000 forces. They are there to secure the airport, the port and the main buildings, and patrolling. That is already happening," he said.

Ban said U.N. troops worked through the night to reach those trapped under the rubble at the U.N. headquarters building and have begun clearing some of the main roads in Port au Prince "which will allow assistance and rescuers to reach those in need."

The secretary-general urged the international community "to come to Haiti's aid in this hour of need" and announced that the U.N. would provide $10 million for relief from its emergency fund.