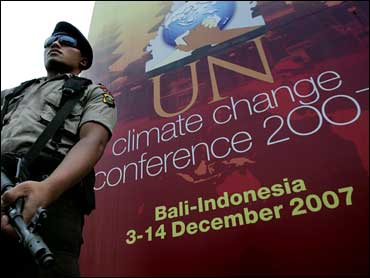 Delegates and scientists from around the world opened the biggest-ever climate conference Monday, aiming to build a new international pact by 2009 to combat global warming, or risk economic and environmental disaster caused by rising temperatures.

Some 10,000 conferees, activists and journalists from nearly 190 countries gathered on the resort island of Bali for two weeks of U.N.-led talks that follow a series of scientific reports this year concluding that the world has the technology to slow global warming, but must act immediately.

The Bali meeting will be the first major climate change conference since former U.S. Vice President Al Gore -- due to arrive next week -- and a U.N. scientific council won the Nobel Peace Prize in October for their environmental work, fueling the growing sense of urgency as ice caps melt, oceans rise and extreme weather increases.

"The negotiations have to move faster and more decisively here in Bali," said Kenyan Environment Minister Kivutha Kibwana, the outgoing president of the conference, which met last year in Nairobi. "We have an opportunity ... to save the environment and save the planet Earth for future generations."

The immediate aim of the Bali conference will be to launch negotiations toward a pact to replace the Kyoto Protocol on global warming when it expires at the end of 2012, and set an agenda for the talks and a deadline. The United Nations says such an agreement should be concluded by 2009 in order to have a system in place in time.

A main thrust of the conference will be to draw the United States, the world's largest emitter of greenhouse gases blamed for global warming, into the process. Washington did not ratify the Kyoto Protocol, arguing that mandatory cuts in emissions would harm the economy and calling into question the veracity of global warming science.

Confronted with the scientific reports of the past year, however, the government of U.S. President George W. Bush has signaled a willingness to play a larger role in the negotiations, and U.N. officials agree that they must craft a post-Kyoto framework that Washington will go along with.

Among the most contentious issues ahead will be whether emission cuts should be mandatory or voluntary, as the United States favors. Also on the agenda will be to what extent up-and-coming economies like China and India will have to rein in their skyrocketing emissions, and how to help the world's poorest countries adapt to a worsening climate.

The United States could find itself isolated at the conference, now that Australian Prime Minister-elect Kevin Rudd, whose party swept to power in general elections just one week ago, immediately put signing the Kyoto pact at the top of his international agenda.

"We see a lot of momentum," said Eric Young, of the Natural Resources Defense Council, an environmental group. "We need the U.S. to do as much as the rest of the world."

Trying to fend off charges that America is not doing enough, Bush said last week that a final Energy Department report showed U.S. emissions of carbon dioxide, a leading greenhouse gas, declined by 1.5 percent last year while its economy grew.

The meeting comes after a Nobel Prize-winning U.N. network of scientists issued a landmark report concluding the level of carbon and other heat-trapping greenhouse gas emissions must be stabilized by 2015 and decline from there to stave off the worst effects of climate change.

The solutions are within reach, they said, from investing in renewable energy to improving energy efficiency. Without action, temperatures will rise, resulting in droughts, severe weather, dying species and other consequences, they said.

The Kyoto pact signed a decade ago required 36 industrial nations to reduce carbon dioxide and other heat-trapping gasses emitted by power plants and other industrial, agricultural and transportation sources. It set relatively small target reductions averaging 5 percent below 1990 levels by 2012.

Much of what will happen behind closed doors in Bali will revolve around nuances, with debates over words like "commitment" versus "mandatory."

At best, analysts believe, Bali could lead to a two-year negotiation in which the United States under a new administration, the Europeans and other industrial nations commit to deepening blanket emissions cuts.

And they say major developing countries could agree to enshrine some national policies -- China's auto emission standards, for example, or energy-efficiency targets for power plants -- as international obligations.