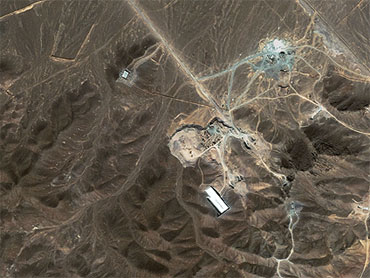 Iranian technicians have moved highly sophisticated technical equipment into a previously secret uranium enrichment site in preparation for starting it up in 2011, the International Atomic Energy Agency said in a new report Monday.

The report offered no estimate of the new plant's capabilities but a senior international official familiar with the watchdog agency's work in Iran said that it appeared designed to produce about a ton of enriched uranium a year.

That would be enough for a nuclear warhead, but too little to fuel the nearly-finished plant at the southern port of Bushehr and other civilian reactors Iran is planning to bring on line in the coming years, though the launch date was Monday.

The IAEA also noted that Iran's enrichment at the Natanz site - revealed by dissidents in 2002 and under agency monitoring - was stagnating, with output remaining at mid-2009 levels.

The report did not offer a reason. But the official suggested that nuclear experts previously working at Natanz could now be preoccupied with putting the finishing touches on the newly-discovered site, called Fordo.

As early as three years ago, Iranian officials had announced that immediate plans for the Natanz site were to install about 8,000 enriching centrifuges, and Monday's report suggested that Tehran had reached that goal

The 7-page report - the latest IAEA summary of what it knows about Iran - said that as of Nov. 2, about 8,600 centrifuges had been set up but only about 4,000 were enriching - or 600 less than in September. Still, the official said output had been steady since June with about 100 kilograms - 220 pounds - of enriched uranium being produced a month.

The report said that Natanz had churned out close to 4,000 pounds of low-enriched, or nuclear fuel-grade uranium by Nov. 2 - close to the amount considered by experts that would be needed for two nuclear weapons.

But the report's main focus was Fordo, a highly fortified underground space. Iran informed the IAEA only in September that it was building the Fordo facility, leading the U.S., British and French leaders to denounce Tehran for keeping its existence secret. IAEA inspectors visited the plant last month and the report noted "an advanced stage of construction," with support equipment for centrifuges already in place.

Iran says it fulfilled its legal obligations when it revealed the plant's construction, although IAEA chief Mohamed ElBaradei has said Tehran was "outside the law" and should have informed his agency when the decision to construct was made.

Nations suspicious of Tehran's nuclear program believe the Islamic Republic decided to inform the IAEA only after it became convinced that the plant's existence had been noted by foreign intelligence services - and was about to be revealed by Western leaders.

A senior Western official recently told The Associated Press that Fordo appeared too small to house a civilian nuclear program but large enough to serve for military activities.

Monday's report - prepared for a meeting next week of the IAEA's 35-nation board - did not address the issue of size or function, beyond saying that the Fordo facility would house about 3,000 centrifuges, which the senior international official said could turn out about just over a ton of enriched uranium annually.

Fordo's existence has heightened concerns of other possible undeclared facilities that are not under IAEA purview and therefore can be used for military purposes.

Moscow on Monday dashed Iranian hopes that the Russian-built nuclear reactor at Bushehr will be switched on this year. Officials in Russia and Iran had previously announced plans to switch it on by 2010, giving Iran its first operating nuclear power plant decades after construction started.

"We expect serious results by the end of the year, but the launch itself will not happen," Russia's state-run RIA Novosti news agency quoted Russian Energy Minister Sergei Shmatko as saying. ITAR-Tass and Interfax had similar reports.

Iran's president warned the West not to pressure Tehran over its nuclear program, saying this only makes the country more determined to gain power by advancing its nuclear technology.

The comment by Mahmoud Ahmadinejad appeared to be a veiled threat that Iran would try to intensify its efforts to enrich uranium if nuclear negotiations with the international community fail.

"Cooperation with Iran in the nuclear field is in the interests of Westerners. Their opposition will make Iran more powerful and advanced," Ahmadinejad said in a statement posted late Sunday on the presidential Web site.

President Barack Obama turned up the pressure Sunday by saying Iran is running out of time to agree a U.N.-brokered plan to ship its low-enriched enriched uranium out of the country to enrich it to a higher level. The West had hoped this plan would dramatically reduce its stockpile of enriched uranium and thwart any attempts to build nuclear weapons.

Instead of responding to the U.N. proposal, Iran made a series of counterproposals. It said instead it wanted to buy nuclear fuel from abroad and also suggested U.N. inspectors could supervise uranium enrichment in the country.

Tehran has also said it only wants to send part of its stockpile in several shipments abroad.

The U.N. offer drafted October requires Tehran to ship around 70 percent of its stockpile of low-enriched uranium to Russia in one batch by the end of the year for further enrichment.

Iran is currently enriching uranium to less than five percent, which is sufficient to produce fuel for its future nuclear power plant, but not for arms making. Enriching uranium to even higher levels can produce weapons-grade materials.

According to the U.N. plan, after further enrichment in Russia, France would convert the uranium into fuel rods that would be returned to Iran for use in a reactor in Tehran that produces medical isotopes. Fuel rods cannot be further enriched into weapons-grade material.