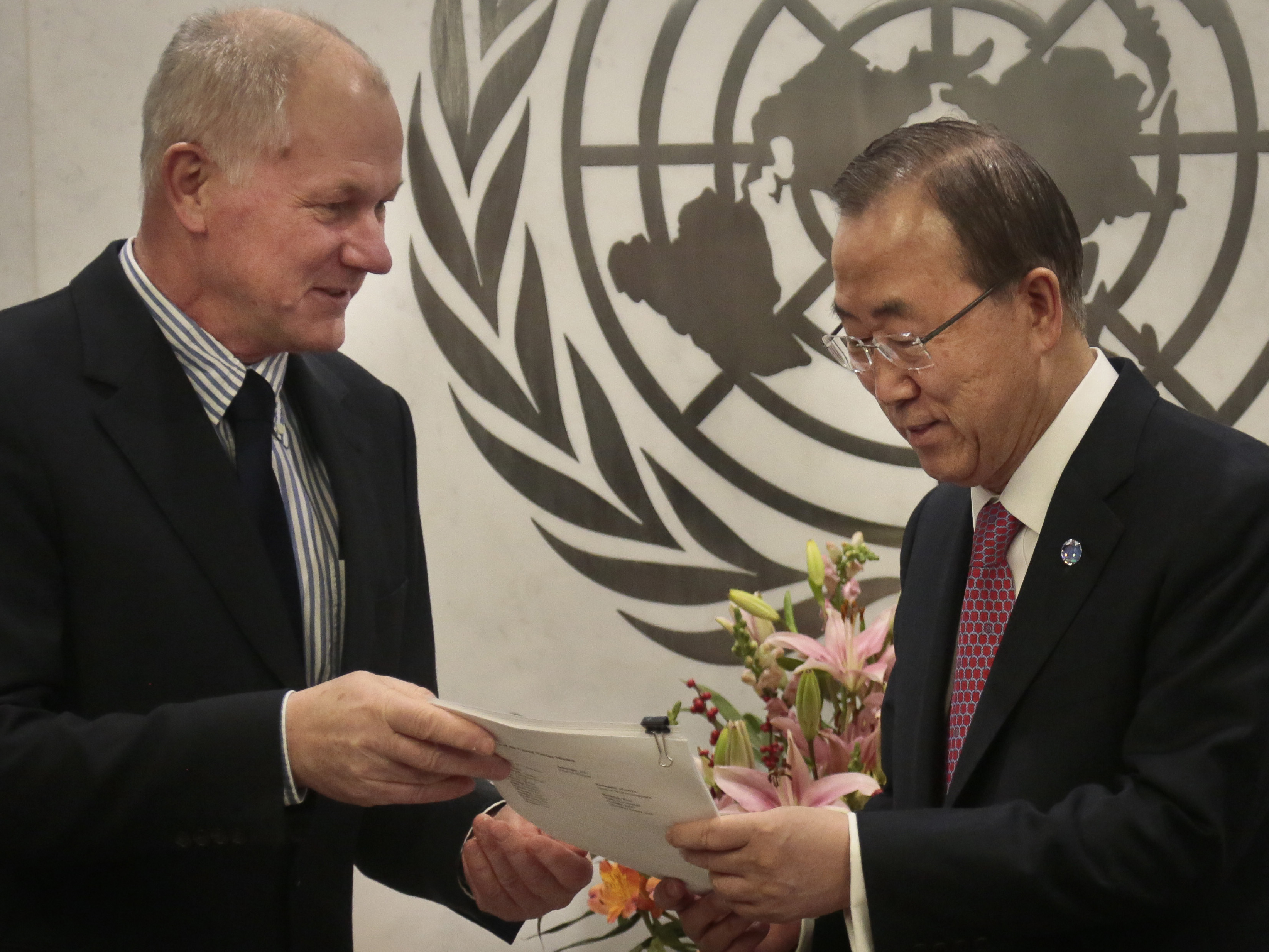 UNITED NATIONS - Chemical weapons were probably used in four locations in Syria this year, in addition to the confirmed attack near Damascus in August that forced the government to abandon its secret chemical stockpile, U.N. inspectors said in a report released Thursday.

The inspectors' limited mandate barred them from identifying whether the government or opposition fighters were responsible for any of the attacks.

Thursday's report said evidence indicated chemical weapons were probably used in Khan al Assal outside Aleppo, Jobar in Damascus' eastern suburbs, Saraqueb near Idlib in the northwest, and Ashrafiah Sahnaya in the Damascus countryside. In two cases, it found "signatures of Sarin."

In an initial report on Sept. 16, Sellstrom's team concluded that evidence collected in the Ghouta area of Damascus following an Aug. 21 attack provided "clear and convincing evidence that surface-to-surface rockets containing the nerve agent sarin were used." Graphic video footage showed dozens of people gasping for air and bodies lined up and the U.S. government said more than 1,400 people were killed.

The confirmed use of chemical weapons in Ghouta, and the threat of possible U.S. military action, led to a U.S.-Russian agreement to eliminate Syria's chemical weapons by mid-2014. The process of getting Syrian chemicals that can be used to make weapons out of the country is currently underway.

The experts said they collected "credible information that corroborates the allegations that chemical weapons were used in Khan al Assal on March 19, 2013 against soldiers and civilians." The report said information from medical, military and health personnel corroborated the occurrence of rapid mass poisoning "by an organophosphorous compound."

But the inspectors said the release of chemical weapons at the site couldn't be independently verified because it lacked "primary information" on how the chemical agents were delivered and because environmental and medical samples weren't scientifically collected, preserved and analyzed.

The U.N. mission said it collected evidence "consistent with the probable use of chemical weapons in Jobar on Aug. 24, 2013 on a relatively small scale against soldiers." But it said it lacked information on the delivery system and the chain of custody for samples, and said therefore it could not "establish the link between the victims, the alleged event and the alleged site."

The report said Jobar was "compromised by previous demining activities and by visits of representatives of the Syrian Government who had reportedly moved the remnants of two explosive devices alleged to be the munitions used in the incident." The U.N. team was able to examine those remnants at a storage location.

The inspectors said interviews with survivors and clinicians and medical records confirmed symptoms of "organophosphorous" poisoning. They said blood samples recovered by the Syrian government on Aug. 24 and authenticated by the U.N. using DNA techniques "tested positive for signatures of Sarin," and one blood sample from the same patients on Sept. 28 tested positive for Sarin.

At Saraqueb, the inspectors said they collected evidence "that suggests that chemical weapons were used ... on April 29, 2013 on a small scale, also against civilians." Again, they said they lacked information on the delivery system and the chain of custody for environmental samples and therefore couldn't link the event, the site "and the deceased woman."

The inspectors said samples of several of her organs, taken during an autopsy performed in the presence of inspectors, "tested positive for signatures of Sarin."

The U.N. mission said it collected evidence "that suggests that chemical weapons were used in Ashrafia Sahnaya on Aug. 25, 2013 on a small scale against soldiers." But it said it lacked primary information on delivery systems and said samples collected by the U.N. experts one week and one month after the alleged incident tested negative.

The report says the U.N. investigative team was unable to make on-site visits to almost all of the sites where chemical weapons allegedly were used, mostly because of poor security conditions. Of the seven sites in the final report, the team did visit Ghouta and Jobar.

The report was then sent to members of the U.N. Security Council. Ban said he would address the 193-member General Assembly on Friday and the council on Monday about the report's findings.