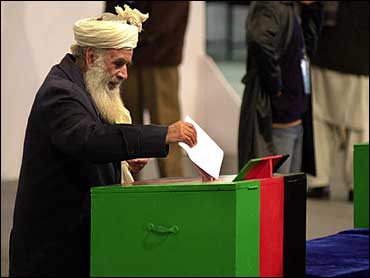 A plan to disarm Afghanistan's warring militias ahead of landmark elections is "seriously in jeopardy" because of obstruction by powerful commanders, the United Nations warned Thursday.

The Afghan Ministry of Defense adopted a plan in late March to disarm 40 percent of the country's estimated 100,000 irregular fighters by June 30. But the U.N.'s top official in Afghanistan said the plan, which President Hamid Karzai used to drum up billions of dollars in aid pledges at a donor conference in Germany, has not yet begun.

"The possibility that it will be completed in time is now seriously in jeopardy," U.N. Special Representative Jean Arnault said in a statement read by his spokesman.

The United Nations says disarming the militias is crucial to ensuring that presidential and parliamentary elections slated for September are free and fair.

In another challenge to election plans, the Taliban claimed a deadly attack on voter registration workers and said more violence was planned.

The Britons and their Afghan translator were gunned down Wednesday on their way back from a remote clinic. Security forces found their bodies in a deep, forested valley of Nuristan province, some 100 miles east of the capital, Kabul.

Abdul Hakim Latifi, who claims to speak for the Taliban, said Thursday that its rebels carried out the killings.

"If Afghans go for voter registration the punishment is the same as for these three people," Latifi told AP by satellite phone. He denounced the polls as a "drama" staged by the United States.

He said a Taliban military council was planning to launch operations in different parts of Afghanistan, including Kabul.

It was not possible to independently verify the claims of Latifi, who is one of several people who claim to speak for the Taliban.

Karzai vowed at a Berlin conference in April to tackle feuding warlords and militias, many of whom are suspected of involvement in the country's booming drug trade.

But the Defense Ministry, headed by powerful faction leader Mohammed Fahim, has been slow to implement the disarmament plan, raising suspicion about his intentions.

"I think it boils down to the will of those who control military formations and weapons," he said.

Officials in Karzai's office and at the Defense Ministry were not immediately available for comment.

U.N. officials say three key commanders for the Tajik-dominated Jamiat faction — to which Fahim also belongs — are stalling on handing over lists of soldiers to be disarmed.

Arnault said the units to be slimmed or scrapped had no role in fighting militants, and were not involved in enforcement efforts against organized crime or drug trafficking.

"Quite the contrary, many of them have been in the past two years involved in factional fighting which is a continuing cause of instability and of suffering," Arnault said.

U.N. and Afghan officials had identified job opportunities for all the affected soldiers, he said.

Ghulam Mohammad Masoum, a spokesman for Khan, said half of Herat's 12,000 militia fighters were dismissed a month ago and a list of their names was given to the Defense Ministry.

"If Karzai and the U.N. will give us a guarantee that we will not be attacked, we will sign up tomorrow," Sabur said. "The U.N. is not considering the balance of power."

"They (Afghan people) have stressed again and again that the national election could be a genuine exercise in free political choice only after guns cease to be a tool in the hands of local power holders," he said.

"No one should be allowed to betray such a basic and legitimate aspiration."

The attack on the two Britons, who were preparing safe registration sites, was the third on U.N. election workers in as many months, though neither of the earlier attacks had claimed any victims.

Previously limited to eight major cities, voter registration began in 30 of the country's 34 provinces on Saturday.

The U.N. plans to register some 10 million Afghans by the end of June. On Tuesday, the last day for which figures were available, 34,589 Afghans signed up, the largest one-day total so far, bringing the total registered so far to almost 2 million. Thirty percent are women.

Separately, the State Department said on Wednesday that it had been contacted by Pakistan about an incident in which coalition troops allegedly crossed over the border from Afghanistan.

"We have told the Pakistan government that the coalition absolutely respects the territorial integrity of Pakistan. We are working in close cooperation with Pakistani security forces operating on the other side of the border," the department said in a statement.