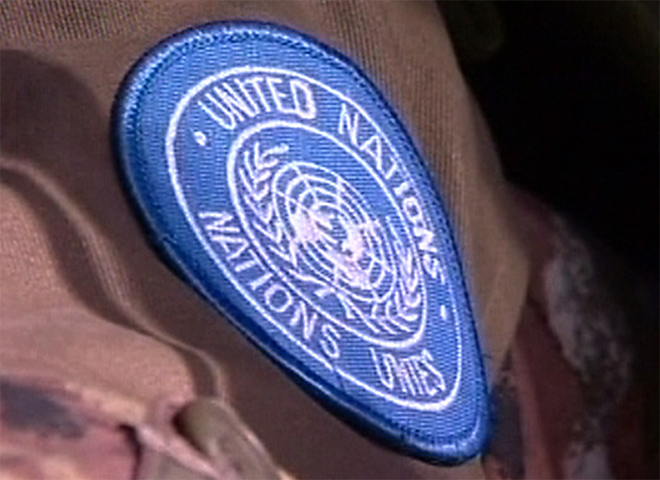 (AP) UNITED NATIONS - The U.N. Security Council reached a tentative agreement Friday night on a resolution that would expand the number of U.N. cease-fire observers in Syria from 30 to 300 and let Secretary-General Ban Ki-moon decide on their deployment based on conditions on the ground and consolidation of a cease-fire.

France's U.N. Ambassador Gerard Araud said the text, negotiated over many hours, would be sent to capitals overnight for consideration and the council would meet at 11 a.m. EDT Saturday for a vote.

Russia's U.N. Ambassador Vitaly Churkin expressed hope "there's going to be a unanimous vote tomorrow." But U.S. Ambassador Susan Rice, the current council president, said there is a possibility that not all 15 council members would agree to the text or have instructions from their government.

The final draft merged two rival texts proposed by Russia and European Council members and there were compromises on both sides.

The Europeans wanted to include a threat of nonmilitary sanctions against Syria if it fails to withdraw all its troops and heavy equipment from cities and towns, but Russia and China vehemently oppose sanctions against President Bashar Assad's government and that provision was eliminated.

Instead, the final draft uses language from the resolution adopted last Saturday authorizing deployment of the 30-strong advance team. It expresses the Security Council's intention to assess implementation of the new resolution "and to consider further steps."

The key difference in the original texts was whether there should be any conditions for deployment of the expanded force.

Ban accused Syrian President Bashar Assad on Thursday of failing to honor a six-point peace plan drafted by international envoy Kofi Annan that took effect a week ago. He said violence has escalated and has demanded an immediate halt to all attacks by the government and opposition.

The European text said before the new observers are deployed the secretary-general should determine "to his satisfaction" that Syria has implemented its pledge to send troops and heavy weapons back to barracks. The Russian draft had no conditions.

The compromise language in the final text says the expanded mission "shall be deployed expeditiously subject to assessment by the secretary-general of relevant developments on the ground, including the consolidation of the cessation of violence."

France's Araud said the Security Council wants to send the observers as quickly as possible but "at the same time, we have to take into account the danger for the observers — so that's the reason why the secretary-general will have to assess the situation on the ground."

"It's a new type of mission," Araud told reporters. "It's a first time that the U.N. is sending in a war zone observers, because there is still fighting ... there is still violence."

Russia's Churkin said he hoped the Security Council's authorization of the 300 strong observer force will send "a strong and good political signal" to the Syrian government and the opposition.

"We hope the people who have been courageous enough to go there with the advanced party will know that they're not out there in limbo — that more people will come and the (U.N.) Secretariat and the Security Council is taking this exercise very seriously," he said.