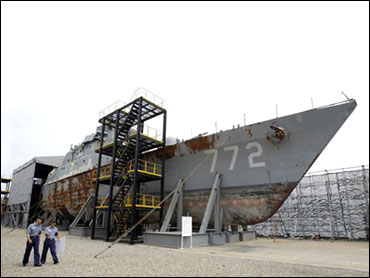 The U.N. Security Council on Friday condemned a deadly attack on a South Korean warship that killed 46 sailors and pointed a finger toward North Korea, but didn't directly blame the reclusive communist nation.

A statement approved by all 15 council members expressed "deep concern" over the findings of a South Korean-led international investigation concluding that a North Korean torpedo sank the 1,200-ton Cheonan on March 26.

The statement, read by the council president, calls for "appropriate and peaceful measures to be taken against those responsible."

But it doesn't identify who is responsible, and "takes note" of North Korea's response "that it had nothing to do with the incident."

The North has warned that if the council blames the country over the sinking it could lead to war.

South Korea had wanted the council to put blame on the North. But China, the North's closest ally and a veto-wielding council member, opposed a third round of sanctions against North Korea or direct blame for the sinking.

The North has proposed military talks with the United States next week to discuss the situation.

Late last month, the American-led U.N. Command, which oversees an armistice that ended the Korean War in 1953, proposed general-level talks with North Korea to discuss the warship sinking. The North, however, rejected the offer, urging Washington not to interfere in inter-Korean affairs under the name of the U.N.

On Friday, however, the Pyongyang reversed its position and proposed a working-level contact between colonels with the U.S. next Tuesday at the border village of Panmunjom to prepare for the general-grade talks.

North Korea made the proposal because South Korea has rebuffed its calls for direct inter-Korean military talks, according to the Korean Central News Agency.

North Korea has called for a new joint investigation by both Koreas.

Two American-based researchers from South Korea also suggested that it's too soon to blame the North for the sinking.

Jae-jung Suh, a political scientist at Johns Hopkins University, and Seoung-hun Lee, a University of Virginia physicist, said the report issued after the investigation had numerous flaws and could have contained fabricated evidence.

The international investigation concluded that the Cheonan sank after a torpedo exploded in waters about 10-20 feet (3-6 meters) away from its hull, causing a "bubble effect" and destroying the ship with its shockwaves. It said North Korea was implicated by the discovery of a torpedo fragment with "No. 1" written on it in Korean.

The two researchers, however, said the report failed to sufficiently substantiate such claims.

"There is no evidence that the ship was destroyed by the bubble effect, or of shockwaves," Suh told reporters at a news conference in Tokyo. "We're not sure where it happened, we're not sure when it happened. The only conclusion that can be drawn is that there was no outside explosion."

Lee and Suh said X-ray data submitted in the report contained inconsistencies that "cast profound doubt" on the integrity of the data, and said the "No. 1" was written in ink that should have burned off under the intense heat of the blast, suggesting that it was fabricated.

Though skeptics are in the minority, questions over the details of the sinking have been raised in South Korea since the report was released.

South Korea's military dismissed their claims as "nothing new."

Lee said he has received no support from North Korea.