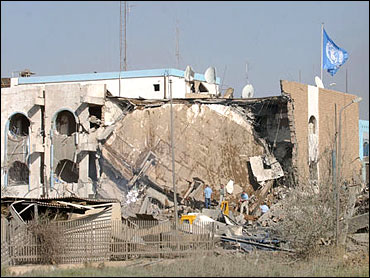 A suicide attacker set off a truck bomb on Tuesday outside the hotel that serves as U.N. headquarters in Baghdad. At least 20 U.N. workers and Iraqis were killed, including the chief U.N. official in Iraq, and 100 were wounded.

Sergio Vieira de Mello, a 55-year-old veteran Brazilian diplomat who was nearing the end of his four-month mission as the U.N.'s top man in Iraq, was wounded and trapped in the rubble at the Canal Hotel, where the U.N was based. Hours later, the U.N. announced his death.

According to witnesses, a cement truck exploded at a concrete wall outside the hotel at around 4:30 p.m. The blast left a six-foot-deep crater in the ground, shredded the hotel's facade and stunned an organization that had been welcomed by many Iraqis in contrast to the U.S.-led occupation forces.

While the hotel was well guarded, the building next door, a hospital, was vulnerable, reports CBS News Correspondent Randall Pinskton. Someone managed to maneuver the truck bomb into a driveway, next to the U.N. headquarters.

The blast occurred during a U.N. press conference, ironically, on clearing leftover land mines to make Iraq a safer place. The scene was captured by CBS News cameraman Atheer Hameed, who kept filming despite the mayhem.

The video shows images of chaos and unimaginable horror. Everywhere, torn bodies and blood-soaked survivors with makeshift bandages; the stunned and wounded stumbling through the door, stepping over those unable to move.

Outside, they hold onto each other, shocked that the war had come to the United Nations. Medivac helicopters can be seen in the air, ambulances on the ground and an intense effort to find survivors in the rubble.

President Bush, at his ranch in Crawford, Texas, condemned the bombing, calling the attackers "enemies of the civilized world."

"These killers will not determine the future of Iraq," Mr. Bush said. "Every sign of progress in Iraq adds to the desperation of the terrorists and the remnants of Saddam's brutal regime."

The U.N. Security Council, which was briefed about the bombing at a closed-door meeting, called the blast a "terrorist attack."

"Those who killed him have committed a crime, not only against the United Nations but against Iraq itself," U.N. Secretary-General Kofi Annan said in a statement, calling Vieira de Mello "an outstanding servant of humanity."

It's still too early to pinpoint responsibility for the blast, reports CBS News Correspondent David Martin, but U.S. officials say there are three groups working to undo the American occupation and reconstruction of Iraq: