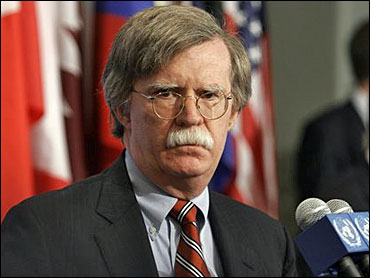 Bolton's nomination has languished in the Senate Foreign Relations Committee for more than a year, blocked by Democrats and several Republicans. Sen. Lincoln Chafee, a moderate Republican who lost in the midterm elections Nov. 7 that swept Democrats to power in both houses of Congress, was adamantly opposed to Bolton.

In a statement, President Bush expressed "deep regret" at Bolton's decision and accused senators who blocked a vote by the full Senate on Bolton's confirmation of "stubborn obstructionism."

"They chose to obstruct his confirmation, even though he enjoys majority support in the Senate, and even though their tactics will disrupt our diplomatic work at a sensitive and important time," Mr. Bush said.

"President Bush has made the right decision in accepting Ambassador Bolton's resignation," said Democratic Senate Leader Harry Reid of Nevada. Reid said the president "should now nominate a U.N. Ambassador who is ready and willing to work with our allies around the world, and who understands the pressing need to change course in Iraq."

Senator John Kerry, who lost the 2004 White House race to Mr. Bush, won't miss Bolton. The Massachusetts Democrat said America needs a U.N. ambassador who has "the full support of Congress." Kerry said Bush ought to pick a replacement who, in his words, "can put results ahead of ideology."

The White House had argued in recent weeks that Bolton had demonstrated his value and professionalism in the job and deserved to be confirmed. But even a Senate still in Republican hands didn't have the numbers to make it happen, CBS News White House correspondent Mark Knoller reports.

Critics have questioned Bolton's brusque style and whether he could be an effective bureaucrat who could force reform at the U.N.

"Ambassador Bolton failed to secure confirmation because of his criticism of the U.N. itself, his role in arms intelligence before the Iraq war, as well as his negotiating style," said CBS News foreign affairs analyst Pamela Falk.

"But by all accounts he grew into the job, negotiating support for some tough resolutions supporting the administration's position on North Korea and Iran," Falk said.

Mr. Bush gave Bolton the job temporarily in August 2005, while Congress was in recess. Under that process, the appointment expires when Congress formally adjourns, no later than early January.

The White House resubmitted Bolton's nomination last month. But with Democrats capturing control of the next Congress, his chances of winning confirmation appeared slight. The incoming chairman of the Senate Foreign Relations Committee, Democratic Sen. Joe Biden of Delaware, said he saw "no point in considering Mr. Bolton's nomination again."

While Mr. Bush could not give Bolton another recess appointment, the White House was believed to be exploring other ways of keeping him in the job, perhaps by giving him a title other than ambassador. But Bolton informed the White House he intended to leave when his current appointment expires, White House deputy press secretary Dana Perino said.

Mr. Bush planned to meet with Bolton and his wife later Monday in the Oval Office.

"He served his country with extraordinary dedication and skill, assembling coalitions that addressed some of the most consequential issues facing the international community," the president said. "During his tenure, he articulately advocated the positions and values of the United States and advanced the expansion of democracy and liberty.

"Ambassador Bolton led the successful negotiations that resulted in unanimous Security Council resolutions regarding North Korea's military and nuclear activities. He built consensus among our allies on the need for Iran to suspend the enrichment and reprocessing of uranium," Mr. Bush added. "His efforts to promote the cause of peace in Darfur resulted in a peacekeeping commitment by the United Nations. He made the case for United Nations reform because he cares about the institution, and wants it to become more credible and effective."

Bolton, who pushed strongly for U.N. reform, has had strained relations with many in the U.N. Secretariat, led by Secretary-General Kofi Annan, and has repeatedly called for all top U.N. officials to leave when Annan steps down as U.N. chief on Dec. 31 and is replaced by Ban Ki-moon.

"I think Ambassador Bolton did the job he was expected to do," Annan said Monday morning when asked about Bolton's resignation. "He came at a time when we had lots of tough issues from reform to issues on Iran and North Korea. I think as a representative of the U.S, government, he pressed ahead with the instructions he had been given and tried to work as effectively as he could."

As late as last month, Mr. Bush, through his top aides, said he would not relent in his defense of Bolton, despite unwavering opposition from Democrats who view Bolton as too combative for international diplomacy.