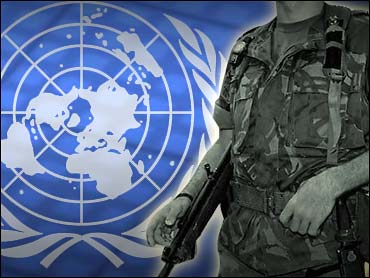 At least 50 peacekeepers have received punishments ranging from reduction in military rank to eight months imprisonment for committing sexual abuses on United Nations missions since 2007, the U.N. said Thursday.

The data were released after media organizations asked what measures countries were taking against peacekeepers accused of rape and other abuses in conflict areas such as Congo. The U.N. can investigate allegations of misconduct, but prosecution is handled solely by governments contributing personnel to missions.

The figures show a significant increase in prosecutions and court-martials by national authorities this year. The disciplinary action against 33 peacekeepers in "cases involving sexual exploitation and abuse" through November included lesser penalties from dismissal, forced retirement and withdrawal of an officer's commission to prison sentences reaching eight months.

Only two military personnel were punished for similar abuses in 2008, and 15 in 2007, according to the U.N. data aggregated by the organization's field support department.

"When allegations of misconduct involving military and police personnel are substantiated, the U.N. can repatriate the individuals concerned and ban them from participating in future peacekeeping operations," the U.N. said.

Allegations of sexual exploitation and other crimes have dogged U.N. peacekeeping missions almost since their inception in 1948, with abuses reported in missions from Bosnia and Kosovo to Cambodia, East Timor, West Africa and Congo. The issue was thrust into the spotlight after the United Nations found in early 2005 that peacekeepers in Congo had sex with Congolese women and girls, usually in exchange for food or small sums of money.

In response, the U.N. adopted a "zero tolerance" policy toward sexual abuse and a universal code of conduct that required training for all peacekeepers. But it left punishment for wrongdoers to individual countries, which has been a continuing problem.

The figures show that the U.N. has referred to national authorities over 450 instances of misconduct - sexual and otherwise - since 2007. It received responses in only 29 of these cases.