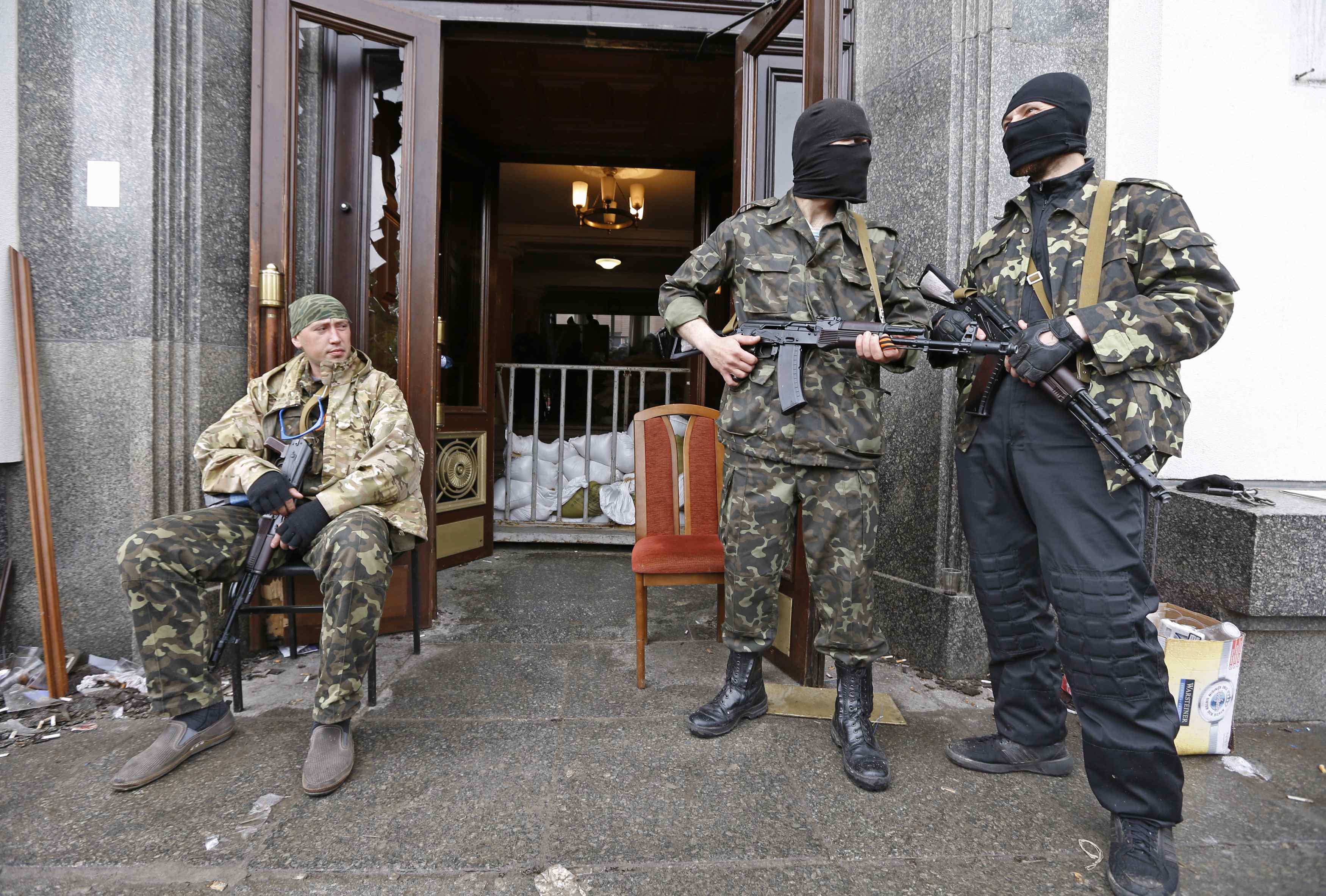 HORLIVKA, Ukraine -- Ukraine's police and security forces are "helpless" to quell unrest in two eastern regions bordering Russia, and in some cases are cooperating with pro-Russian gunmen who have seized scores of government buildings and taken people hostage, the country's president said Wednesday.

Oleksandr Turchynov said the goal now was to prevent the agitation from spreading to other territories.

"I will be frank: Today, security forces are unable to quickly take the situation in the Donetsk and Luhansk regions under control," Turchynov said at a meeting with regional governors.

"The security bodies ... are unable to carry out their duties of protecting citizens. They are helpless in those matters. Moreover, some of those units are either helping or cooperating with terrorist organizations."

Turchynov instructed the governors to try to prevent the threat from spreading to more central and southern regions.

He spoke hours after pro-Russian gunmen seized more administrative buildings in eastern Ukraine. Insurgents wielding automatic weapons took control and hoisted a separatist flag on top of the city council building Wednesday morning in the city of Horlivka in the Donetsk region. They also took control of a police station in the city, adding to another police building which they had controlled for several weeks.

An Associated Press reporter saw armed men standing guard outside the building and checking the documents of those entering. One of the men said that foreign reporters will not be allowed in and threatened to arrest those don't obey orders. Similar guards were also seen outside the police station in the city.

The insurgents now control buildings in about a dozen cities in eastern Ukraine, demanding broader regional rights as well as greater ties or outright annexation by Russia. The militiamen are holding some activists and journalists hostage, including a group of observers from a European security organization.

In Luhansk, one of the largest cities in eastern Ukraine, gunmen in camouflage uniforms maintained control of several government offices they seized Tuesday.

Eastern Ukraine, which has a large Russian-speaking population, was the heartland of support for Viktor Yanukovych, the ousted president who fled to Russia in February. The government that replaced him in Kiev has resisted the insurgents' demands, fearing they could lead to a breakup of the country or mean that more regions could join Russia, as Crimea did.

Kiev and Western governments accuse Moscow of orchestrating the protests in eastern Ukraine. The United States and the European Union rolled out a fresh set of economic sanctions against Russia this week, but Moscow has remained unbowed, denying its role in the unrest and saying the actions were Kiev's fault.