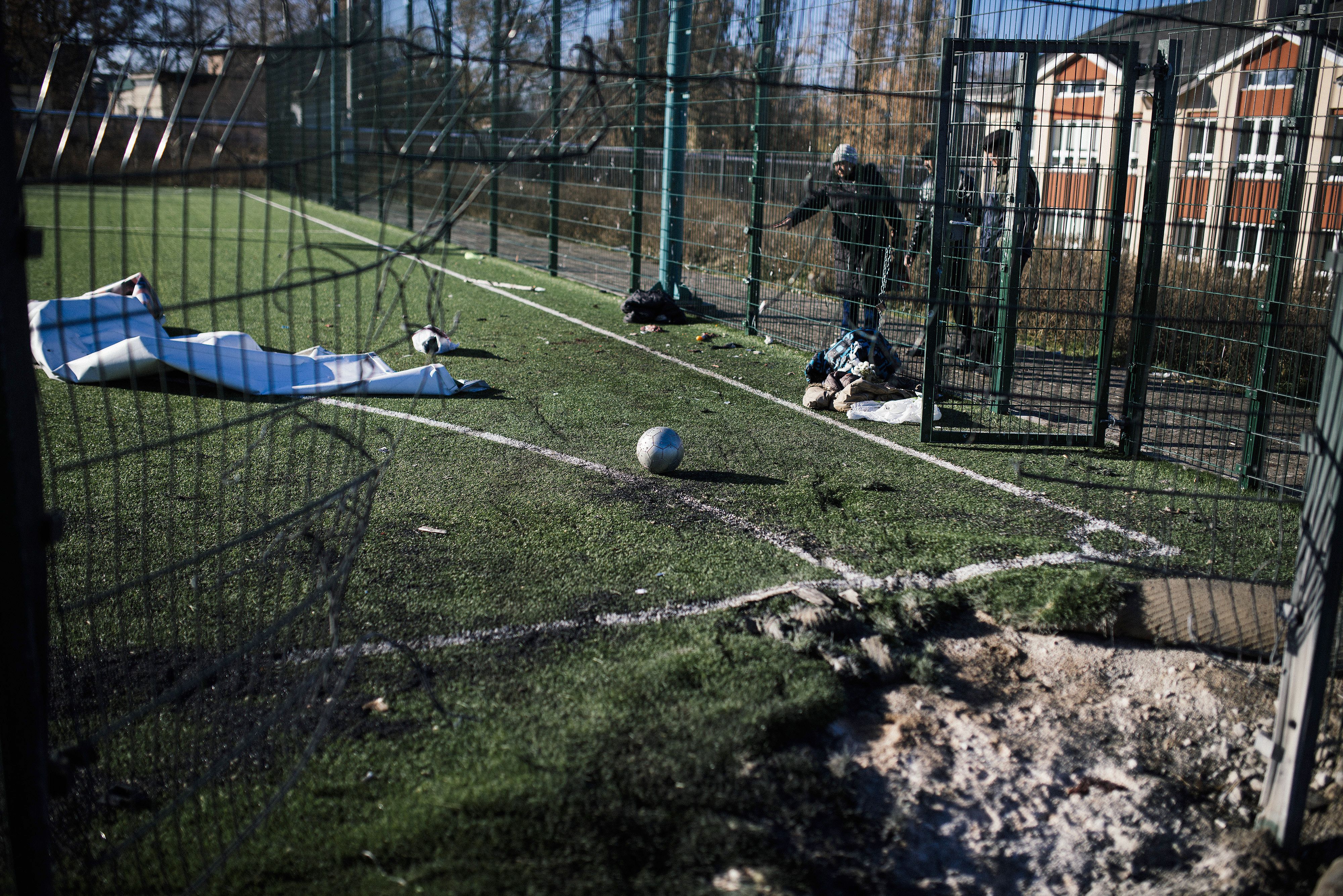 DONETSK, Ukraine -- The shelling of a high school in Ukraine's rebel stronghold of Donetsk has chilled even the battle-hardened in this weary nation.

The killing of two teenagers as they were playing soccer after lunch Wednesday is a stark reminder that the cease-fire agreed upon in September has only really ever existed on paper. Four other students were wounded, according to Dr. Vladimir Voropayev, chief of the children's trauma unit at the regional hospital in Donetsk.

The warring sides - government troops on one side and pro-Russian separatists on the other - now look as far from any lasting settlement as they ever were.

In the soccer field at Donetsk's school No. 63, two bloodied coats still lay out in the open Thursday as relatives and staff gathered at the scene.

Alexander Yeliseyev, the father of one victim, 18-year-old Andrei, walked by in shock as he gathered belongings left behind when his son's body was removed - a dark brown coat and a pair of sneakers.

"They went to play football at about 2 p.m., while I was at work. And then the shelling began. Here you see the result," Yeliseyev said, gulping back sobs.

He said 14-year-old Danya, another student, was also killed.

Authorities in the Ukrainian capital, Kiev said the security services will investigate the shelling of a school, but officials already appear to have made their mind up. Security spokesman Andriy Lysenko said preliminary information indicated the shells flew into the school from a location controlled by separatist forces.

All that is certain so far is that the school where the shells landed is at least 2 kilometers (1.2 miles) from the nearest government position but close to rebel posts. That would appear to lend weight to claims of Ukrainian culpability - government troops shelling the rebels - but Lysenko said the shelling was planned in advance by the rebels to discredit government forces.

Government officials have failed to produce cast-iron evidence of such claims in the past, and independent rights groups say there's evidence that government artillery has hit homes in eastern Ukraine. Residents of stricken areas have frequently complained that rebels deploy artillery near homes, invariably drawing return fire.

The UN estimates more than 4,000 people have been killed over six months of fighting between Ukrainian government forces and pro-Russian separatists in eastern Ukraine. That includes several hundred who have died since a much-violated cease-fire was signed in early September.

At school No. 63, which was lavishly refurbished last year with funds provided by local billionaire Rinat Akhmetov, a dozen teachers and sobbing parents huddled by the soccer field Thursday as the roar of outgoing missile fire was heard a few kilometers (miles) away.

Two mortars had landed on the school premises Wednesday: one next to a concrete porch by the school, shattering a few windows. The one that killed the students landed behind a goalpost, scorching the ground and leaving a small crater.

Oksana Safonova's son, 11-year old Kirill, was lucky to sustain only wounds to the shoulder, hip and ribs. Quick thinking may have saved his life.

"He said to me: 'Mom, we got down on the ground and then the mortar landed next to me. I passed out. It hurt so bad. Then I realized that I don't want to die and I came around,'" Safonova said.

At the regional trauma hospital in Donetsk, a pale, frail-looking Kirill asked after his friend, Nikita, who was also being treated for injuries. Later Thursday, Nikita was discharged from the intensive care unit and joined his schoolmate.

Voropayev, the doctor, said his staff has treated 39 other children injured in artillery strikes since June. At the peak of the fighting in summer, they had to evacuate the children into the basement for three days.

Accustomed now to the sounds of shelling and war, Donetsk residents near the front lines have come to ignore some basic safety precautions. Safonova said her perception of what is dangerous has been dulled by living for months in a war zone, but added that parents still strive to instill caution in their children.

"The sense of peril is everywhere, but we are not hiding," she said. "I used to tell him: 'Stay at home, don't go outside.' But you can't tie him down, he's just a boy."