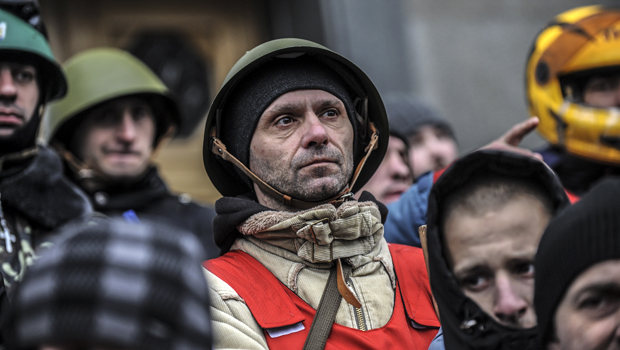 KIEV, Ukraine -- Russia scrambled fighter jets to patrol its border and reportedly gave shelter to Ukraine's fugitive president as pro-Russian gunmen stormed offices of Ukraine's strategic Crimea region, deepening the crisis for the new Ukrainian government even as it was being formed.

The moves pose an immediate challenge to Ukraine's new authorities as they seek to set up an interim government for the country, whose population is divided in loyalties between Russia and the West. Ukraine's new prime minister said the country's future lies in the European Union but with friendly relations with Russia. Moscow, meanwhile, has launched a massive military exercise involving 150,000 troops and put fighter jets on patrol along the border.

In Brussels, U.S. Defense Secretary Chuck Hagel urged Russia not to take any action on Ukraine that could be misinterpreted.

At a news conference after a NATO defense ministers meeting, Hagel said the U.S. is closely watching Russia's military exercises and that the U.S. strongly supports Ukraine's territorial integrity. He said the U.S. expects all nations to respect Ukraine's sovereignty and avoid provocations.

"This is a time for very cool, wise leadership, on the Russian side, and on everybody's side," Hagel said.

The defense secretary said his staff was trying to set up a phone call for him with the Russian defense minister, Sergei Shoigu, and that U.S. Secretary of State John Kerry would also be talking to Russian Foreign Minister Sergei Lavrov.

NATO urged Russia not to do anything that would "escalate tension," although the alliance said that neither it nor the United States had drawn up plans for how they would respond if Russia did intervene militarily.

Germany would do everything to support the new Ukrainian government, Chancellor Angela Merkel said in London after talks with British Prime Minister David Cameron, who said Russia must respect Ukraine's territorial integrity.

Russia said on Thursday that Ukraine's interim government is not a government of national unity but a "government of winners" which includes extreme nationalists, suggesting it fell far short of representing the whole country.

Foreign Ministry spokesman Alexander Lukashevich said an agreement in a Feb. 21 peace deal between President Viktor Yanukovych, who was driven out of Kiev by a three-month protest movement, and his foes to create a national unity government had been "consigned to oblivion."

As for Yanukovych, a respected Russian news organization reported that he was staying in a Kremlin sanatorium just outside Moscow.

"I have to ask Russia to ensure my personal safety from extremists," Yanukovych said in a statement carried by Russian news agencies on Thursday. He said he still considers himself president and sees the new Ukrainian authorities as illegitimate.

Shortly after, the same three Russian news agencies quoted an unnamed Russian official saying that Yanukovych's request for protection "was satisfied on the territory of Russia."

Russian news agencies later reported that Yanukovych will hold a news conference Friday in the southern Russian city of Rostov-on-Don.

Oleksandr Turchynov, who stepped in as acting president after Yanukovych's flight, condemned the takeover of government buildings in Crimea as a "crime against the government of Ukraine." He warned that any move by Russian troops off of their base in Crimea "will be considered a military aggression."

"Unidentified people with automatic weapons, explosives and grenades have taken over the governmental buildings and the Parliament building in the autonomous region of Crimea," he said. "I have given orders to the military to use all methods necessary to protect the citizens, punish the criminals, and to free the buildings."

In Kiev, lawmakers chose Arseniy Yatsenyuk as the new prime minister. He will face the hugely complicated task of restoring stability in a country that is not only deeply divided politically but on the verge of financial collapse. The 39-year-old served as economy minister, foreign minister and parliamentary speaker before Yanukovych took office in 2010, and is widely viewed as a technocratic reformer who enjoys the support of the U.S.

Opposition leaders chose Independence Square - the center of the revolution - to introduce the country's new government Wednesday. The introductions prompted booing from some opposition supporters in the square.

Parliament must ratify the new ministers Thursday, but CBS News correspondent Clarissa Ward reported that for some in the crowd, there were too many familiar faces from the Yanukovych days on stage.

Shortly before the lawmakers chose him as the leader of the new Cabinet, Yatsenyuk said Ukraine doesn't want a fight with Russia, but insisted the country wouldn't accept the secession of the southern Crimea region.

He said Crimea "has been and will be a part of Ukraine."

Yanukovych fled after riot police attacked protesters in Kiev's central square, killing more than 80 people, and European and Russian officials intervened. He has not been seen publicly since Saturday, when he said he remained the legitimately elected president - a position that has been backed by Russia.

Russia's respected RBK news organization reported Wednesday evening that Yanukovych was staying at the Barvikha sanatorium, which is run by the presidential administration's property department. The spokesman for this department, Viktor Khrekov, told The Associated Press on Thursday that he has no information about this.

The RBK report was impossible to confirm, but security at the Ukraina Hotel was unusually heavy late Wednesday, with police watching from parked vehicles outside and guards posted throughout the lobby. Some of Yanukovych's allies, also reported to have been at the hotel, may have still been there.

In a clear warning to Ukraine, Putin on Wednesday ordered massive military exercises involving most of the military units in western Russia. On Thursday, as part of the exercises, fighter jets were put on combat alert and were patrolling the border, Russia's Defense Ministry said in a statement. It didn't specify the areas where patrol missions were being conducted. The military also announced measures to tighten security at the headquarters of Russia's Black Sea Fleet on the Crimean peninsula in southeastern Ukraine.

The military maneuvers prompted a sharp rebuke from U.S. Secretary of State John Kerry, who warned Russia that any military intervention in Ukraine would be a "grave mistake."

The Russian Foreign Ministry voiced concern Thursday about the Russian-speaking population in Ukraine and vowed to protect their interests. State-owned ITAR-Tass news agency quoted a statement read at a session of the ministry's board on Thursday, saying that Russia "will have a firm and uncompromising response to violations of the rights of compatriots by foreign states."

Russia has accused Ukraine's interim leaders of failing to control radicals who threaten the Russia-speaking population in Ukraine's east and south, which includes the Crimean Peninsula.

Witnesses said the gunmen in Simferopol, the Crimean regional capital, wore unmarked camouflage uniforms and carried rocket-propelled grenades, sniper rifles and other weapons. They raised the Russian flag over the local parliament building.

The men did not immediately voice any demands and threw a flash grenade in response to a journalist's questions. They wore black and orange ribbons, a Russian symbol of the victory in World War II, and put up a sign reading "Crimea is Russia."

Maxim, a pro-Russian activist who refused to give his last name, said he and other activists had camped overnight outside the local parliament in Simferopol when 50 to 60 heavily armed men wearing flak jackets and carrying rocket-propelled grenade launchers and sniper rifles took over the building.

"Our activists were sitting there all night calmly, building the barricades," he said. "At 5 o'clock unknown men turned up and went to the building. They got into the courtyard and put everyone on the ground.

"They were asking who we were. When we said we stand for the Russian language and Russia, they said: 'Don't be afraid. We're with you.' Then they began to storm the building bringing down the doors," he said. "They didn't look like volunteers or amateurs; they were professionals. This was clearly a well-organized operation."

A convoy of seven armored personnel carriers was seen on a road near the village of Ukromnoye, some 6 miles away from the city of Simferopol. In Moscow, Russia's Foreign Ministry said that Russia was abiding by an agreement with Ukraine that sharply restricts troop movements, but acknowledged some unspecified troops movements, claiming they didn't violate the deal, the Interfax news agency reported.

In a statement, the local government said Crimean Prime Minister Anatoly Mogilyev had tried to negotiate with the gunmen but was told "they were not authorized to negotiate and present demands."

Ukraine's acting interior minister, Arsen Avakov, said on his Facebook page that police were sealing off the area.

"Measures have been taken to counter extremist actions and not allow the situation to escalate into an armed confrontation in the center of the city," he said.

Phone calls to the Crimean legislature rang unanswered, and its website was down.

Meanwhile, Ukraine's currency, the hryvnia, dropped further to a new record low of 11.25 to the U.S. dollar, a sign of the country's financial distress.

One of the new government's first tasks will be to seek rescue loans from the European Union and the International Monetary Fund. The finance ministry has pegged the country's needs at $35 billion dollars for this year and next to pay salaries and debts and cover the large budget deficit.

U.S. considering controlling exports to Russia if there is an invasion of Ukraine