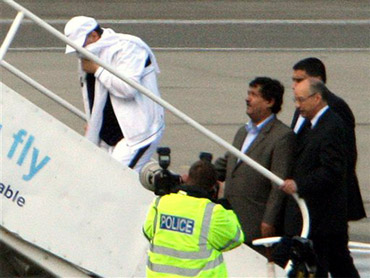 Britain's government says it has warned Libya that any celebration of Friday's anniversary of the release from jail of the Lockerbie bomber would be deeply offensive to the families of the mainly U.S. victims of the attack.

Abdel Baset Al-Megrahi, the only person convicted in connection with the 1988 bombing of Pan Am Flight 103 above Lockerbie, Scotland, was ordered in 2001 to serve 27 years in jail, but freed on Aug. 20 of last year on compassionate grounds, as he is suffering from prostate cancer.

In a Friday statement urging Libya to show restraint, Britain's Foreign Office described the bombing, which killed 259 people onboard - mostly Americans - and 11 on the ground, as the "worst act of terrorism in British history."

Before al-Megrahi's release from a Scottish jail, doctors said he would likely live only for three months.

Friday marks the first full year of al-Megrahi's freedom. Many families are outraged at the hero's welcome he received as he returned to Libya, and his continued longevity.

"Particularly on this anniversary, we understand the continuing anguish that al-Megrahi's release has caused his victims both in the U.K. and the U.S. He was convicted for the worst act of terrorism in British history," the Foreign Office said.

"Any celebration of al-Megrahi's release would be tasteless, offensive and deeply insensitive to the victims' families. We have made our concerns clear to the Libyan government, including through representations by the U.K. ambassador to Libya."

The decision to release al-Megrahi was taken by Scotland's government, rather than the British government in London. Prime Minister David Cameron, who at the time was opposition leader, condemned the move.

"The government is clear that al-Megrahi's release was a mistake, both the current prime minister and foreign secretary made this clear at the time," the Foreign Office statement said.

First Minister Alex Salmond, the head of Scotland's government, told The Associated Press in an interview this week that he stood by the decision.

Scottish and British officials have also declined requests to offer testimony to a planned Senate Committee on Foreign Relations hearing on the case.

Some U.S. legislators have expressed concerns that oil giant BP - seeking better access to Libyan oil fields - may have pressured officials to approve al-Megrahi's release, a claim strongly disputed by ministers in Scotland and London.

While American campaigners and relatives of those who died in the attack have largely focused on the controversy surrounding the release of al-Megrahi, many British families say they harbor doubts about al-Megrahi's guilt.

"The senators should not be asking why Mr. al-Megrahi was released, but why he was convicted in the first place," said Rev. John Mosey, whose daughter Helga, 19, died in the attack. "This is not about one man, but about the 270 people who died."

Lawyers for al-Megrahi have long argued that the attack was actually the result of an Iranian-financed Palestinian plot, and that authorities in Britain and the United States tampered with evidence, disregarded witness statements and steered investigators toward the conclusion that Libya, not Iran, was to blame.

Libya accepted responsibility and paid compensation for the Lockerbie bombing, the argument goes, as a quick and easy way to shake off its pariah status.

Retired Detective Chief Superintendent Stuart Henderson, who helped link al-Megrahi to the bombing, recently told Scottish television that the idea that anyone would attempt to frame al-Megrahi was ridiculous.

"What is harder to explain is why, by and large, the British families have been ready to entertain the idea that al-Megrahi may not be guilty, while the American families, on the whole, have not," he said.

Mosey and other families have called for a public inquiry into the case and urged U.S. senators to listen to their concerns.

"Instead of hounding the doctors and Scottish politicians in the case, I would like them to come over to speak to us, the U.K. families of Flight 103," Mosey said.