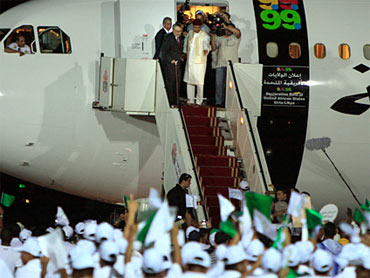 A senator said Tuesday that he was postponing this week's hearing on the release of the man convicted of bombing Pan Am Flight 103 over Lockerbie, Scotland because of "stonewalling" by British and Scottish officials who declined to testify.

"They would prefer to sweep this under the rug," said Sen. Robert Menendez, a New Jersey Democrat who was to chair Thursday's Senate Foreign Relations Committee hearing.

The committee is looking into whether British-based oil company BP had sought Abdel Baset al-Megrahi's release to help get a $900 million exploration agreement with Libya off the ground. BP acknowledged that it had urged the British government to sign a prisoner transfer agreement with Libya, but stressed it didn't specify his case.

"It's utterly disappointing and, I think, pretty outrageous that none of these key witnesses will cooperate with our request to answer questions before the Senate Foreign Relations Committee," the senator said at a news conference. "They have stonewalled."

Menendez said the committee will shift its focus to a "longer-term multidimensional inquiry" into al-Megrahi's release.

Al-Megrahi served eight years of a life sentence for the Dec. 21, 1988, bombing, which killed all 259 people on board, most of them Americans, and 11 people on the ground. Last August, Scotland's government released the cancer-stricken man on compassionate grounds and he returned to Libya.

Martin Longden, a spokesman at the British embassy in Washington, said his government had provided the committee with a comprehensive account of what happened in the case.

BP spokesman Scott Dean would only say that the company responded to the committee's request and offered a witness.

"BP offered us a vice president in charge of Europe," Menendez said. "We want a witness who was engaged in these conversations, transactions."

He also said the senators realized that calling people to testify from foreign governments is unusual.

"But we also believe this is not a common case," Menendez said, noting that 38 of those who died lived in New Jersey.

In Scotland, a government spokesman, speaking on condition of anonymity in keeping with government policy, said: "The Scottish Government has provided full information in order to be as helpful as possible to the Senate committee, and any decision on the timing of a hearing is of course a matter for the committee itself."