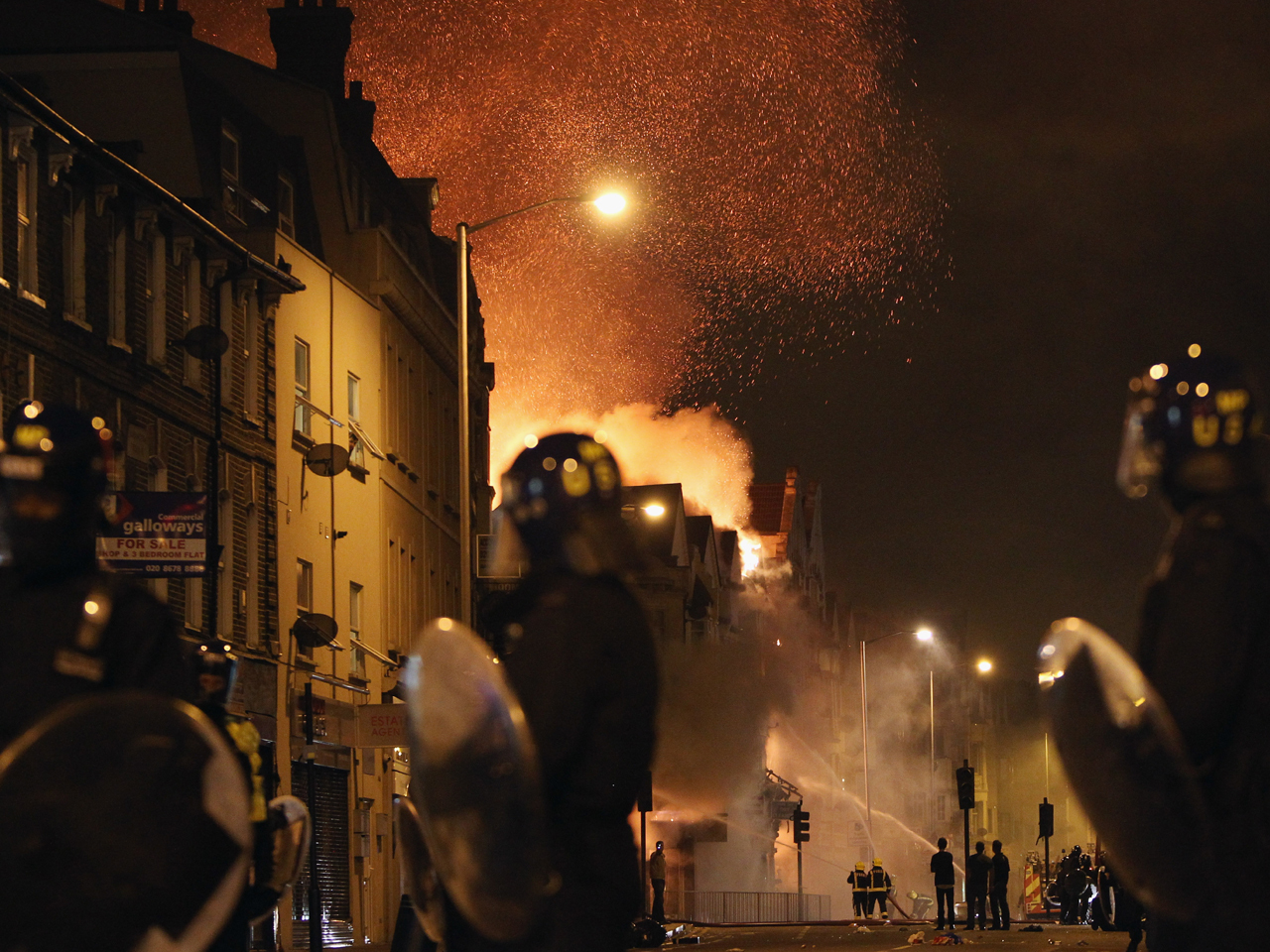 LONDON - British Prime Minister David Cameron recalled Parliament from its summer recess Tuesday and nearly tripled the number of police on the streets after three days of rioting in London blossomed into a full-blown political crisis.

Cameron described the scenes of burning buildings and smashed windows in London and several other British cities as "sickening," but refrained from more extreme measures such as calling in the military to help beleaguered police restore order.

Instead, he said 16,000 officers would be on the streets of the capital Tuesday night, almost tripling the number that were out Monday night.

Some 525 arrests have been made in London alone and dozens were arrested in other cities. Police announced Tuesday that plastic bullets would be "one of the tactics" available to officers to quell the riots.

The riots also claimed their first death — a 26-year-old found shot dead in a car.

"People should be in no doubt that we will do everything necessary to restore order to Britain's streets and to make them safe for the law-abiding," Cameron told reporters after rushing home from an Italian vacation to chair a crisis meeting at his Downing Street office.

A wave of violence and looting has raged across London since Saturday, as authorities struggled to contain the country's worst unrest since race riots set the capital ablaze in the 1980s.

Parliament will return to duty on Thursday, as the political fallout from the rampage takes hold. The crisis is a major test for Cameron's Conservative-led coalition government, which includes Liberal Democrats who had long suspected its program of harsh budget restraints could provoke popular dissent.

In London, groups of young people rampaged for a third straight night, setting buildings, vehicles and garbage dumps alight, looting stores and pelting police officers with bottles and fireworks into the wee hours of Tuesday. The spreading disorder was an unwelcome warning of the possibility of violence during London's 2012 Summer Olympics, less than a year away.

England's soccer match Wednesday against the Netherlands in London's Wembley stadium was canceled to free up police officers for riot duty.

Cameron said leaves have been canceled for police in London, and reinforcements have been called in from all over the country. Armored vehicles were deployed in some of the worst-hit districts, but authorities still struggled to keep pace with the chaos unfolding at flashpoints across London, in the central city of Birmingham, the western city of Bristol and the northwestern city of Liverpool.

"The violence we have seen is simply inexcusable. Ordinary people have had their lives turned upside down by this mindless thuggery," police commander Christine Jones said.

London's police said 14 people were injured. It was unclear if the man who died had been among them.

The rioters appeared to have little unifying cause — though some claimed to oppose sharp government spending cuts, which will slash welfare payments and cut tens of thousands of public sector jobs through 2015.

But many were attracted simply by the opportunity for violence. "Come join the fun!" shouted one youth in the east London suburb of Hackney, where shops were attacked and cars torched.

Rioters were left virtually unchallenged in several neighborhoods and able to plunder from stores at will or attempt to invade homes. Restaurants and stores closed early across London again Tuesday, fearing more looting.

Graham Reeves, 52, stood dumbstruck in front of the smoldering ruins of his family store, the House of Reeves on Croydon in south London. The store is a local landmark run by his family for decades — he said his 80-year old father was hysterical when he heard the news.

"No one's stolen anything," Graham Reeves said. "They just burnt it down."

Disorder flared throughout the night, from gritty suburbs along the capital's fringes to central London's posh Notting Hill neighborhood.

Police said all London police holding cells were full and prisoners were being taken to surrounding communities. At least 100 have been charged, including an 11-year old. Police were also monitoring Twitter, and warned that those who posted messages inciting the violence could face arrest.

Three people were arrested on suspicion of attempted murder after a police officer was struck by a car in north London early Tuesday. About 44 police officers have been injured in the violence.

The images of London's violence recalled the 2005 riots in France, when hooded and masked youths fought police in three weeks of raging overnight battles in housing projects, confrontations that became a challenge to the French state itself.

Mass deployments of police eventually subdued the rioters, but tensions between French police and youth in the projects continue today, with periodic clashes between youths with Molotov cocktails and police with tear gas. French police say between 30 and 50 cars are set on fire during an average week. On the most fiery night of the 2005 riots, more than 1,400 cars went up in flames.

Violence in London first broke out late Saturday in the low-income, multiethnic northern district of Tottenham, where protesters demonstrated against the fatal police shooting of Mark Duggan, a 29-year-old father of four who was gunned down in disputed circumstances Thursday.

A brief inquest hearing into Duggan's death was being held Tuesday, though it will likely be several months before a full hearing.

Duggan's death stirred old animosities and racial tensions similar to those that prompted massive U.K. race riots in the 1980s, despite efforts by London police to build better relations with the city's ethnic communities.

But, as the latest unrest spread, some pointed to rising social tensions in Britain as the government slashes 80 billion pounds ($130 billion) from public spending by 2015 to reduce the huge deficit, swollen after the country spent billions bailing out its foundering banks.

Sony Corp. said a major blaze had broken out at its distribution center near Enfield, north London, damaging DVDs and other products. So many fires were being fought in the capital that Thames Water warned that some customers could face water pressure drops. In the Clapham Junction area of south London, a mob stole masks from a party store to disguise their identities and then set the building on fire.

Dozens of people attacked shops in Birmingham's main retail district, and clashed with police in Liverpool and Bristol.

"This is the uprising of the working class. We're redistributing the wealth," said Bryn Phillips, a 28-year-old self-described anarchist, as young people emerged from a store with chocolate bars and ice cream cones.

Some residents called for police to deploy water cannons to disperse rioters, or call on the military for support. They questioned the strength of leadership within London's police department — particularly after a wave of resignations prompted by the country's phone-hacking scandal.

Youths used text messages, instant messaging on BlackBerry phones and social media platforms such as Twitter to coordinate attacks and stay ahead of the police.

About 100 young people clashed with police in the Camden and Chalk Farm areas of north London on Monday night. In the Peckham district of south London, where a building was set ablaze along with a bus — which was not carrying passengers — onlookers said the scene resembled a conflict zone. Cars were torched in nearby Lewisham, and in west London's Ealing suburb the windows of each store along entire streets had been smashed.

"There's been tension for a long time. The kids aren't happy. They hate the police," said Matthew Yeoland, a 43-year-old teacher watching the unrest in Peckham. "It's like a war zone and the police weren't doing anything."

Police said Duggan was shot dead last week when police from Operation Trident — the unit that investigates gun crime in the black community — stopped a cab he was riding in.

The Independent Police Complaints Commission, which is investigating the shooting, said a "non-police firearm" was recovered at the scene. But the Guardian newspaper reported that a bullet in the officer's radio was police-issue, indicating Duggan may not have fired at the officer.

Duggan's partner, Semone Wilson, insisted that her fiance was not connected to gang violence and urged police to offer more information about his death. But she rejected suggestions that the riots were linked to protests over his death.

"It got out of hand. It's not connected to this anymore. This is out of control," she said.

The past year has seen mass protests against the tripling of student tuition fees and cuts to public sector pensions. In November, December and March, small groups broke away from large marches in London to loot. In the most notorious episode, rioters attacked a Rolls-Royce carrying Prince Charles and his wife Camilla to a charity concert.

However, the full impact of spending cuts has yet to be felt and the unemployment rate is stable — although it remains highest among youth, especially in areas like Tottenham, Hackney and Croydon.

Some residents insisted joblessness was not to blame. "It's just an excuse for the young ones to come and rob shops," said Brixton resident Marilyn Moseley, 49.