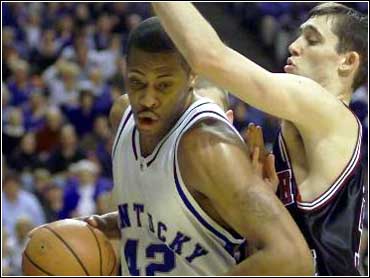 Jamaal Magloire scored 23 points and Keith Bogans 21 on Saturday as the Wildcats pulled away from South Carolina in the second half for a 76-63 victory.

However, with Bogans able to freelance against the zone and Kentucky answering 11 3-pointers by South Carolina (9-13, 1-8) with eight, the Wildcats took control in the second half.

"Our poise in clutch situations is what has stuck out this year," coach Tubby Smith said. "We have been making the right choice in big situations, and that is good to see out of a young team. We were a little flat today. A lot of that was due to the Carolina zone, but offensively we showed poise and patience when it counted."

It was the 13th win in 14 games for Kentucky and the first without reserve forward-center Jules Camara, who is out for up to four weeks with a foot injury. Most of Camara's playing time was picked up by freshman Marvin Stone, who scored four points and grabbed three rebounds, but turned the ball over three times.

Desmond Allison scored 11 points and Tayshaun Prince 10 for the Wildcats, while Magloire led the team with 10 rebounds.

The Gamecocks lost their eighth straight. They were led by Jamel Bradley's four 3-pointers and 14 points. Marius Petravicius and Chuck Eidson each scored 13.

The game featured 10 lead changes and six ties. The Gamecocks trailed only 65-60 with 5:26 remaining, but were outscored 11-3 by the Wildcats down the stretch.
"Our first 35 minutes were very good," South Carolina coach Eddie Fogler said. "With five minutes to go, we were still in the game, with the ball."

Fogler's team had no answer for Magloire, who was in and out of foul trouble and played only 27 minutes. The senior center scored eight of Kentucky's first 15 points and finished 6-of-7 from the field and 11-of-11 from the free-throw line.

"Magloire gives them a presence inside that nobody else in the Southeastern Conference has," Fogler said. "He makes things extremely difficult."

Though South Carolina hung close, Kentucky point guard Saul Smith targeted a 25-second span early in the second half as the Gamecocks' undoing.

With the score tied at 39 and 15:32 remaining, the Wildcats went ahead for good on a pair of Magloire free throws.

On South Carolina's subsequent inbounds pass, Smith tipped the ball to Stone, who slammed it home.

Then, as South Carolina tried to bring the ball upcourt, Bogans stole the ball and charged in for a dunk and a 45-39 lead with 15:15 left.

"You get one turnover or steal and you convert, the crowd jumps in there," Saul Smith said. "They pick up their intensity and we have to pick up ours, because the crowd's into it now, because we play with them."

"We use the press at a time when we can get them rattled a bit," Tubby Smith said. "We made them play faster than they wanted and that allowed us to get those 10 turnovers in the second half."

Kentucky made 16 of 18 free throws overall and won the rebounding battle 33-28.

The most spectacular play of the game belonged to Bogans. As time ran down in the first half with Kentucky trailing 35-33, Stone rebounded Damien Kinloch's missed layup and threw an outlet pass to Bogans, who caught the ball near halfcourt. After looking at the clock and seeing there were 3 seconds left, Bogans charged toward the basket and threw down a hard slam, tying the score at the break.