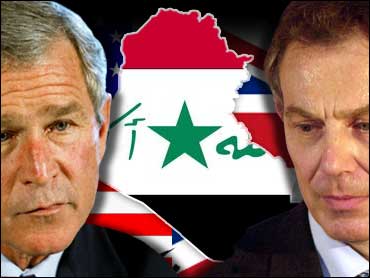 That's right, it was a straight tie. And these were British people speaking ... remember us? Your greatest ally in this 'coalition of the willing' against Iraq.

Surprised? Maybe you should be. Because it is impossible to over emphasize the contempt the majority of people here feel towards your President. Not your country -- your President.

So, why is this? How have we got into a situation where the leader of the free world is as hated as much as a mad dictator who gasses his own people? How did it get this bad?

Let's roll back a little, to the 2000 Presidential Campaign. Here in Britain, most of us followed the race to the White House avidly. And we weren't very impressed with what we saw. We winced every time George W. Bush mispronounced a word, mangled a sentence or confused the facts. Don't get me wrong, we don't like our leaders to reach professor status. We get a bit scared if they quote Greek poetry in their speeches. But we do expect them to have experience in the wider world, to be able to guide the nation calmly when the going gets tough.

So, when George W. finally made it to the White House, we were nervous. And the first few months didn't make things better. There he was, the leader of the world's only superpower, ignoring or tearing up a whole host of international agreements... on the environment, on nuclear proliferation, on international law. We felt uneasy, as it became clear that this was a new type of American administration... one that did what it wanted because nobody dared get in its way.

Then, out of the blue, came 9/11-- that terrible day when you were attacked on your own soil. Here in Britain, the sympathy and support was overwhelming ... and how did President Bush react? Weeks later, he proposed damaging steel tariffs on our exporters to protect America's home producers. Shoulder to shoulder? Give me a break.

Now, the war on Iraq looms. And guess what? The President thinks he should get some allies to join in. How about that? Suddenly, George W Bush has looked at his atlas and discovered there are other countries in the world.

Britain is one of the most American-inspired places you'll ever find. We eat your burgers and we love your movies. But in just over two years, your President has managed to destroy so much of the trust and affection that had built up between us. And that's sad.