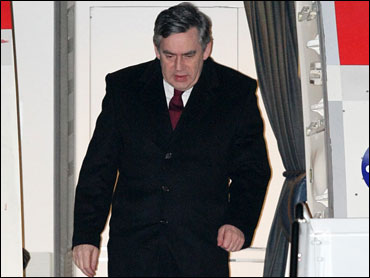 British Prime Minister Gordon Brown was looking for a boost to his political fortunes from President Barack Obama as the two leaders grappled with the global economic crisis at a White House meeting Tuesday.

In hard political times at home, Brown scrambled to be the first European leader to visit Obama and hopes to benefit from the high regard the American president enjoys in Britain and to demonstrate British leadership at a time of economic uncertainty.

Brown, who arrived Monday night, is laying the groundwork for the G-20 economic summit of advanced and developing nations in London next month. The summit, which Brown is chairing, is critical for improving global economic confidence as well as Brown's political prospects.

CBS News correspondent Richard Roth reports that, while Brown's official business in Washington involves coming up with a British-American plan to save the world from economic collapse, unofficially, it's generally believed that what Brown's out to rescue in America - as much as the world economy - is his own political future.

One British journalist, asked by Roth to describe the nature of Brown's D.C. trip, did so with the following phrase: "panting desperation."

Brown plans to deliver a tough economic message for the White House and U.S. lawmakers, whom he will address Wednesday. He is urging the United States to avoid protectionism at a time that it has populist appeal.

Ahead of the U.S. trip, Brown was stressing the traditionally strong bonds between British and American leaders and urging the two countries to lead the world out of crisis.

The White House also pointed to the need for coordinated action.

"The president said in September that we have to act together in helping to stimulate the economies of the G-20 as well as ensuring that there are some financial rules of the road so that we don't find ourselves in the same position a few years down the line," White House press secretary Robert Gibbs said Monday.

Brown has been lagging behind the conservative opposition in British opinion polls. Supporters hope an appearance with Obama and a leading role in next month's economic summit will help reverse his fortunes.

After somewhat frosty relations with President George W. Bush, Brown hopes to prove ties to London are as crucial to the United States as developing relations with China and Japan.

By tackling the protectionism issue, the British chief seeks to present himself as a plain-speaking friend, not reluctant to question his trans-Atlantic ally like predecessor Tony Blair, whom critics dubbed Bush's poodle.

Writing in London's Sunday Times over the weekend, Brown said he wanted to reach agreement with Obama on a global pact for the summit. He said that all nations should agree to inject cash into their economies, sign up to universal banking reforms and back an overhaul of international institutions.

"President Obama and I will discuss this week a global new deal, whose impact can stretch from the villages of Africa to reforming the financial institutions of London and New York - and giving security to the hardworking families in every country," Brown wrote.

Britain has invested billions of pounds to bail out banks and boost the country's economy, while Obama has had a $787 billion economic stimulus bill passed in the United States and is spending hundreds of billions more to bail out the financial sector.

The two leaders are also likely to touch on the war in Afghanistan, Iran's nuclear program, global warming and other topics.