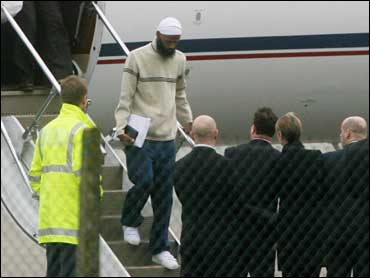 Britain had asked a judge to direct the six men, and six others who plan to launch similar cases, to halt their lawsuits and focus on reaching out of court settlements, allowing an independent inquiry into the accusations to begin.

But High Court judge Stephen Silber ruled Wednesday that the men can press ahead with their cases, even if their lawyers decide to take part in mediation talks aimed at reaching a deal outside the courts. Some documents giving a taste of what might be released in the inquiry also were released, showing an often-confused government position under former Prime Minister Tony Blair.

Prime Minister David Cameron said last week that a retired judge will lead an independent inquiry into how much the government knew about claims that some detainees were badly treated or tortured by allies, including the United States.

Cameron's government says the judge-led inquiry can't begin until the lawsuits are settled, and that mediation would dramatically speed up the process.

Officials claim the court cases could last five years and cost tens of millions of pounds, they also insist that intelligence agency staff have been taken off anti-terrorism duties to review up to 500,000 documents to be disclosed in the cases.

Britain's Cabinet Office said the government believes the inquiry is the most effective way to "review all the issues before the courts," and said it would have access to uncensored material.

Cameron said that two police inquiries into alleged criminal wrondoing by British spies must also be completed before the inquiry can begin.

In the most prominent case, ex-Guantanamo Bay detainee Binyam Mohamed alleges Britain was aware he was beaten, subjected to sleep deprivation and had his genitals sliced with a scalpel while he was held in Pakistan in 2002.

Lawyers for the ex-detainees say they need to see more documents before they can decide whether to enter into mediation - but claim those disclosed so far show government policy was in disarray over detainees.

The documents hint at the type of revelations expected when the judge-led inquiry examines how Britain handled security threats in the wake of the Sept. 11, 2001 attacks.

A series of the documents handed to lawyers were made public for the first time Wednesday after they were discussed in a court hearing.

One set of memos discloses how Britain declined to raise objections over the transfer of British citizens to the U.S. prison camp in Guantanamo Bay, in Cuba.

A January 2002 Foreign Office telegram tells ambassadors and officials that London had "no objection to American plans to transfer U.K. detainees from Afghanistan to Guantanamo Bay," and that the transfer of U.K. nationals was the "best way to meet our counterterrorism objectives by ensuring they are securely held."

Britain later secured the release of nine British citizens, and four men who were previously British residents - including Mohamed - from Guantanamo Bay and called for the prison camp to be closed down.

In another disclosed document, a note of advice between Britain's overseas MI6 intelligence agency and a member of staff conducting interviews of al Qaeda suspects, the agency says "it appears from your description that they may not be being treated in accordance with the appropriate standards."

It is "important that the Americans understand that we cannot be party to such ill treatment," the note states.

Britain's intelligence oversight committee reported in 2005 that an MI6 officer reported concerns about the treatment of a detainee held in U.S. custody in Afghanistan to his superiors. The case was regarded as likely an isolated incident and ministers were not told until 2004, the committee said.