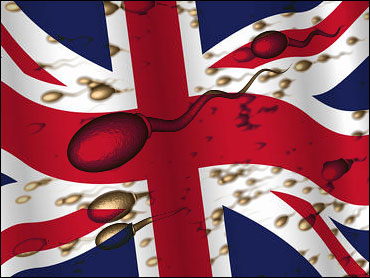 Britain is facing a sperm donor shortage after reversing confidentiality laws and limiting the number of women who can use sperm from one donor, fertility experts warned Wednesday.

Britain in 2005 changed the law protecting anonymous sperm donors and allowed children to learn the identity of donor fathers - one reason, fertility experts say, there are fewer donors now.

"The only countries that seem to have enough sperm are those that pay - like the U.S. and Spain - or the countries that retain anonymity," said Allan Pacey, a member of the British Fertility Society that warned of the shortage in the British Medical Journal.

"In the countries that have removed anonymity ... there seems to be a problem," he said.

Experts say 500 donors a year are needed to cope with the number of couples needing donor insemination in Britain.

Dutch authorities have also put out calls to encourage sperm donors after scrapping anonymity for donors in 2004.

"There is a shortage of sperm donors. This is because of the new laws that make the anonymous donation of sperm impossible," the University of Amsterdam's Fertility Clinic of the Academic Medical Center said on its Web site.

In Britain, only 10 babies can result from one donor - a limit some have called arbitrary. The Dutch allow one donor to supply sperm to 25 women.

The United States does not cap sperm donations at all, according to Eleanor Nicoll, spokeswoman for the American Society for Reproductive Medicine. However, the group suggests that a single donor be limited to no more than 25 births in a population of 800,000 to avoid having siblings from the same sperm donor having children together.

In France, sperm donation is anonymous and the government covers donors' expenses but the country still faces a sperm shortage. France registered 248 sperm donors in 2006, according to the country's Agency of Biomedicine - a level an official there said was not enough to supply demand.

"I don't think we are having a problem with adequate numbers of donors at this time, primarily because we don't have that regulation," he said.

Mark Jackson, 40, decided to donate in 2005, even after Britain's government amended the donor law.

"To worry that someone might come and see you, that something might happen? That's a long way in the future," said Jackson. "I thought maybe I (could) do something to make a difference."

Olivia Montuschi, co-founder of the Donor Conception Network, said changing the confidentiality law was important for the donors' children but shouldn't prevent men from being willing to help.

"What is needed is someone who has the maturity to understand the importance of what they're doing for the future, and the impact that might have on anyone who's conceived," said Montuschi, whose children were conceived using donor sperm. "We are not talking about a fatherhood role."

Although sperm donations from other countries are allowed in Britain, clinics cannot pay donors and donations from abroad are not enough to cope with the shortage, said Pacey, who runs a fertility clinic in Sheffield, 100 miles from London.

"Once upon a time ... we had hundreds and hundreds of people phoning up every year," he said. "Now, 20 a year? Not in any great numbers."