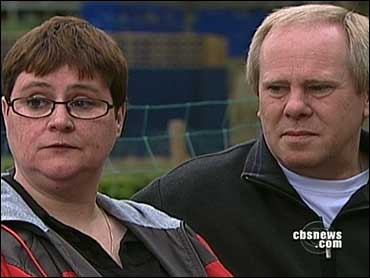 Last year Tina Owen and Mark Puffett would have been driving to work together. CBS News anchor Katie Couric reports they both had good jobs at Woolworth's Warehouse, a five and dime store that once thrived in the United States.

But one week after Christmas, the couple, along with 27,000 coworkers, were made "redundant," the British word for laid-off.

"I've got no job, now way of keeping my house," said Owen. "The only thing that keeps me going is my children."

So most afternoons, Tina and Mark leave their 14-year-old daughter and 5-year-old son with the children's grandmother while they hit the streets looking for work.

"It's very depressing going round the factories and shops, other places, and being told, 'I'm sorry there's no work,'" Owen said. "I mean, I'm getting to the stage now where I don't want to get up in the morning."

"Things will get better," Couric said.

"I hope so, because I just can't go on anymore," Owen replied.

"Have you ever thought of moving out to another area?" Couric asked.

"It's the same all over really," Puffett said.

Tina and Mark's personal pain is being played out every day around the world. It's more than an ad campaign -- It seems we really are connected.

In China, more than 70,000 factories have closed, and 20 million are jobless. In France, more than 2 million are unemployed. In Germany, 3.5 million are out of work. Italy's national debt is now greater than the size of its economy. The slowdown is so severe in Ukraine, daily protests are common, and some textile workers are being paid with the dish towels they manufacture.

Allistair Darling is chancellor of the Exchequer, the British equivalent of the Treasury secretary.

"If you look at the immediate cause of the problems we've had over the last 18 months, the problems that started to affect American banks, affected our banks very, very shortly afterwards and that's no big surprise, because, you know our banks are very heavily involved in the United States," he said.

"There an expression that the U.S. economy gets a cold, and the rest of the world catches the flu," Couric said. "Do you blame the U.S. in any way for this?"

"No, I think it's utterly pointless blaming, you can spend ages blaming people," Darling said. "America's banking system had difficulties. So did ours. So did just about every other banking system in the world. You know, we've all got lessons to learn."

London itself is a stark example of what's gone wrong. The financial center of the city makes up one-third of the jobs here. Despite the fact that 130,000 jobs have been lost since the summer of 2007, the mayor of London, Boris Johnson, is relentlessly optimistic. But even he can't deny the crisis is real.

"Obviously things are tough and I guess if you're looking at London from the other side of the Atlantic, you'd say those guys, the City of London they must be on their knees," Johnson said. "Things must be very, very bad for them and in many ways it is a deep, deep recession. But there are parts of the London economy that doing extremely well and it's fascinating that employment in January actually grew…"

"So did unemployment," Couric said.

"Correct," Johnson said, pausing. "That's an interesting sign of the diversity of the London economy."

Johnson points to tourism and the upcoming 2012 Olympics as evidence that London is moving forward, but most construction has been brought to a grinding halt.

On the street, it's even more apparent. Foreclosed homes are impossible to ignore, and the first American-style auction of foreclosed homes is an unwelcome import.

"Having had a lot of experience in the United States we've seen how the repossession market has just grown over time and I'd say that Britain is probably I'd say about a year behind," said Greg Spiro, an executive vice president with REDC's international division, a company that auctions off foreclosed homes.

Tina and Mark know they too could be weeks away from losing their home. Just one family in one city ravaged by a global economic crisis.

"You got some severance pay and you get unemployment insurance but it must be very difficult to make ends meet on that," Couric said to Owen.

"It is very difficult," Owen said. "I mean to put food on the table, gas and electric on, clothe ourselves as well as our children. It's impossible."

The human toll of a crisis world leaders have come to London to fix.