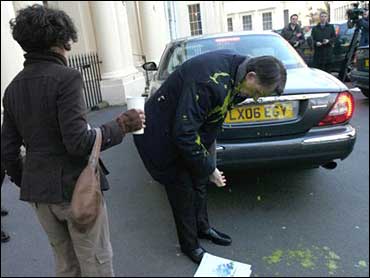 (AP/Plane Stupid/PA)
Plane Stupid. That's the name of the coalition fighting against efforts by the U.K.'s government and business leaders to get a third runway built at London's Heathrow airport.

And it was as a representative of that group that Leila Deen ambushed Britain's Business Secretary this morning and showered him in dyed-green custard - as he arrived for a summit on how to create jobs while reducing carbon emissions.

Plane Stupid has campaigned for months against the push for another runway. They claim the increased number of flights would completely counter Britain's vows to reduce carbon emissions. Construction of the strip would also involve the demolition of many homes in the suburbs west of London and arguably increase noise for thousands living around the city (including myself).

Business leaders and the goverment, with Business Secretary Lord Mandelson as its pointman, argue the city simply cannot maintain its prominent role as a business and transport hub in Europe unless Heathrow's capacity is expanded.

Many aviation experts see expansion as inevitable to Heathrow's viability.

Amsterdam's primary airport — less than two hours' flight away — is an attractive alternative, with its smoothly-run five runways. Flying in or out of Heathrow has been something of a nightmare for years. It's overcrowded and delays due to congestion are take for granted.

In TV interviews after her custard strike (click here to see Sky News' report – and video), Deen described her move as a "last resort" to get her group's message across, having tried to campaign the government via more democratic means already. Plane Stupid argues the government consultation process in deciding on the third runway was corrupted by Mandelson and other officials doing favors for their friends in big business.

Deen, who has been arrested before at environmental protests, called her cup of custard "direct action."

Lord Mandelson, after freshening up a bit, called it an "adolescent protest," and played down any cause for concern over his personal security.

Plane Stupid has pulled a lot of stunts to get its message across, including scaling planes at Heathrow and camping out near the airport. It all gets attention, for a time, but has thus-far failed to garner enough public support to bring sufficient pressure on the government for a change in course.

Messages sent in to British morning news broadcasts about the report varied from people asking Deen for her hand in marriage, to one who called her, "a silly cow who should be arrested."

There seemed to be more of the second variety.