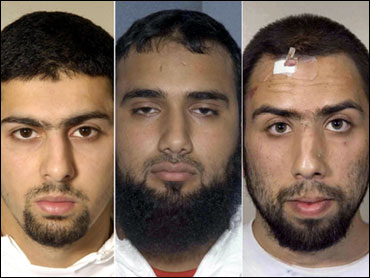 The three final conspirators in a plot to bomb trans-Atlantic airliners and kill thousands of people were sentenced to at least 20 years each in prison on Monday, bringing a long-running legal saga to an end.

Since the plot to detonate liquid explosives aboard aircraft bound for the United States and Canada was uncovered in August 2006, nine people have been sent to prison - and air travel changed for passengers around the world.

Ibrahim Savant, 29, Arafat Waheed Khan, 29, and Waheed Zaman, 26, were convicted last week of conspiracy for being part of a group that planned to detonate liquid explosives hidden in drink bottles, attacks that could have killed people on a similar scale to Sept. 11, 2001.

The convictions came after four years and three trials. Two earlier juries failed to reach verdicts on the charge of conspiracy to murder, and an earlier trial acquitted them of knowing airplanes were the plot's target.

As he handed down the sentence, Judge Timothy Holroyde called the three "foot soldiers," and acknowledged they didn't know what the plot's target was. But he said they intended to kill "an uncertain but potentially large number of innocent men, women and children."

"Each of you agreed to join with others in this conspiracy with each of you intending that you would kill members of the general public and yourselves by acting as a suicide bomber," he said.

In total, nine people were jailed over the plot in a series of seven trials that began in October 2007.

After the plot was exposed in 2006, travel chaos ensued as hundreds of flights were grounded, disrupting the trips of thousands of travelers. Massive lineups formed outside London's Heathrow Airport as huge changes to airport security were implemented - including restrictions on carrying liquids on planes that still continue.

Last September, Abdulla Ahmed Ali - the plot's ringleader - was convicted and jailed for a minimum of 40 years, one of the longest sentences ever handed out by a British court. He hoped to down at least seven passenger jets, and kill thousands, using liquid explosives.