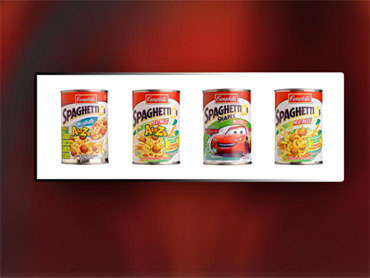 Campbell Soup Company is recalling 15 million pounds of SpaghettiOs with meatballs, the USDA reported late Thursday evening. A cooker malfunctioned at one of the company's plants in Paris, Texas leaving beef and noodles "underprocessed."

To make a can of pre-cooked Spaghettios, the meat, sauce and noodles are first cooked separately, then canned and sealed.
Last, all the cans go through giant cookers, where they are heated until they reach what is called "commercial sterility."

Commercial sterility, also called shelf-stability, is when the cans are free of microorganisms, like bacteria, that could cause spoilage according to the USDA.

The cooker wasn't getting hot enough to guarantee that, Cambells spokesperson Anthony Sanzio told CBS News. And the company cannot be sure exactly when the cooker malfunction occurred.

"If there was spoilage, it would be very noticeable to the consumer. The can might be bloated, or there would be a foul odor when opened." If the product was consumed, Sazio says, there could be nausea or vomiting.

There have been no reports of illness associated with the meat and pasta product, and the company thinks it unlikely that there will be.

Much of the recalled product has likely been consumed already, but in case you have some in your pantry that you're worried about, the recalled cans have "EST 4K" printed on the bottom. The "use-by" date of questionable cans will be between June 2010 and December 2011.

There are about 35,000 cases subject to the recall on the market right now.