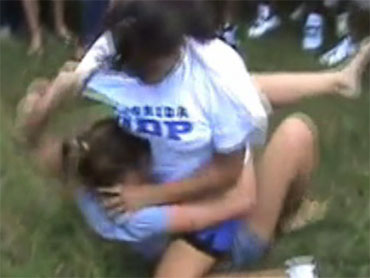 Girls fighting girls on tape is nothing new to the Internet.

But, as CBS News Correspondent Jeff Glor reports, one video, of a particularly ugly fight, is grabbing lots of attention: The mother of one of the two teen battlers allegedly encouraged her daughter, and is facing criminal charges.

The local sheriff says April Newcomb, 39, should instead have been trying to stop or prevent the fight, and she's been formally accused of child abuse.

The brutal brawl between 16-year-olds, in Palmetto, Fla., was apparently over a boy. Their names are being withheld due to their ages.

Many in the cheering crowd came with cell phones, eager , Glor says, to post the video on the Web.

Authorities say Newcomb can be seen in the background, and she can be heard trying to lend her daughter support.

A spokesman for the Manatee County Sheriff's Office, Dave Bristow, said, "We're basically in shock (that) a parent can sit there and watch their child and not intervene. … It's pretty obvious this is child abuse."

Police quote Newcomb as admitting in an interview that she was "wrong, and I understand where y'all are coming from. I think unfortunately it was going to happen no matter what."

It appears Newcomb knew about the fight before it even began. She apparently can be seen walking to the scene with her daughter to confront the other girl.

The fight lasted about three minutes.

Police say nobody was seriously hurt in the melee.

Psychologist Dr. Jeff Gardere, a contributor to HealthGuru.com, told "Early Show" co-anchor Maggie Rodriguez Newcomb's alleged behavior was "criminal. It was atrocious. It was absolutely stupid. And I think, at this point, she realizes what she did was wrong. She got caught up in the moment.

"Good parenting does not dictate that you egg your child on. You work with your child on and teach them conflict resolution skills.

" … The parenting was non-existent here. We've seen this before, where parents get caught up; they're living vicariously through their children. So I guess she wants her daughter to win because, in her own way, she's helping her daughter with her self-esteem. But it's absolutely the wrong thing. Maybe she wants herself to win to say she's got a champion on her hands. But it is absolutely atrocious."

He was also sharply critical of the girls' school, Palmetto High School, for failing to take action after the fight.