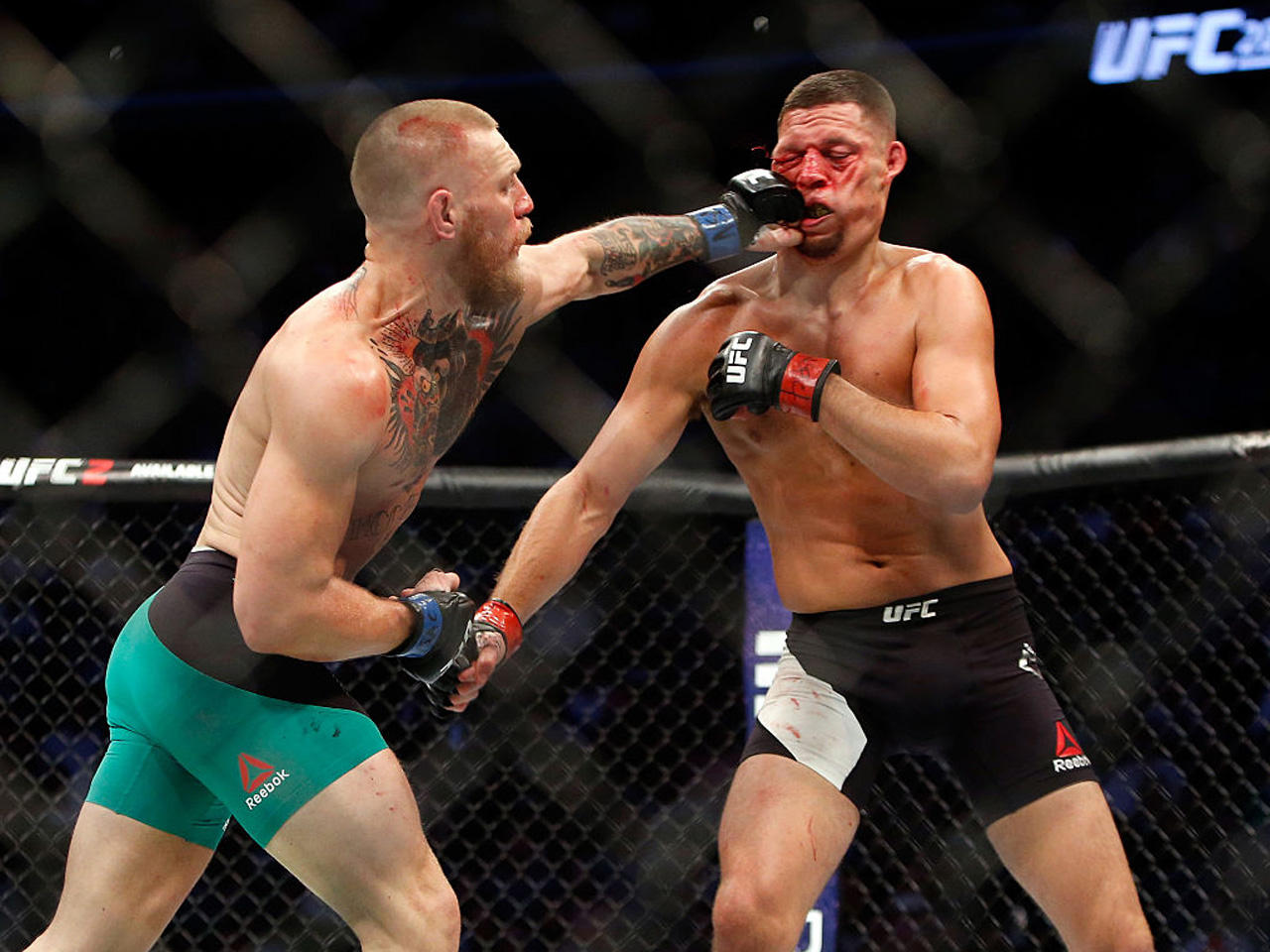 LAS VEGAS - Conor McGregor got his revenge. Now he wants a third fight on his terms.

McGregor evened the score in his rivalry with Nate Diaz by outpointing him Saturday night at UFC 202 in a rematch of their two-roundwelterweight thriller in March.

The two put on an action-packed fight in which McGregor came out strong and then hung on in a tiring, bloody slugfest. Two of the judges scored it 48-47 for McGregor, and the other had it 47-47.

McGregor immediately challenged Diaz to a third fight - but only if Diaz would come down to the lightweight division.

“Surprise, surprise! The king is back!” McGregor said. “If you want this trilogy, it’s on my terms. I came up to 170, now you’ll come back to 155 and we’ll finish what we’ve started. I knew what I had to do this time around and I did it.”

McGregor (20-3) forced the action in the opening round, landing multiple leg kicks to Diaz’s lead leg and a straight left that knocked down Diaz (20-11).

The Irishman took down Diaz twice more in the second round, bloodying his nose and appearing to have total control of the fight.

“I could have gone in there and pressed, but I was patient,” McGregor said.

The persistent Diaz found his footing later in the second, though, unleashing a flurry of strikes and knocking McGregor against the fence. Diaz continued to attack in the third and, for the final 90 seconds of the fourth, they stood in the center of the cage and exchanged blows.

They traded punches again in the fifth, and neither gained an edge until the final 10 seconds, when Diaz secured a trip and landed a few final shots from on top before the bell rang.

McGregor exacted revenge for a loss at UFC 196. McGregor, already the featherweight champ, was initially scheduled to face Rafael dos Anjos for the lightweight title, but dos Anjos pulled out due to injury and McGregor agreed to fight Diaz at welterweight on late notice.

Diaz’s endurance was the difference in the first fight. McGregor pummeled Diaz with multiple shots in the first round, giving Diaz a bloody facial gash, but Diaz weathered the storm and countered with a few shots of his own near the end of the round. Then Diaz dominated the second round with accurate, well-timed boxing before finishing the exhausted McGregor with a rear naked choke.

They were supposed to battle again at welterweight at the landmark UFC 200, but that bout was canceled after McGregor announced his retirement and refused to meet with media. McGregor didn’t end up retiring, but the disturbance got him and Diaz dropped from the card.

Instead, the anticipated rematch was set for UFC 202. The garrulous McGregor had promised to finish Diaz early this time around, and promotion for the fight included a bottle-throwing melee at a press conference Wednesday.

“My respect to the opponent,” McGregor said. “You have to respect Nate and the style that he brings.”

Earlier, Anthony Johnson landed an uppercut 13 seconds into the first round to knock out Glover Teixeira in the co-main event between top-ranked light heavyweights. Johnson (22-5) flattened Teixeira (25-5) with the shot, forcing the referee to call an early end to the fight. Johnson has 13th victories in his past 14 fights.

“I’m coming for you Daniel,” Johnson said, speaking to current light heavyweight champion Daniel Cormier, who was seated near the cage.