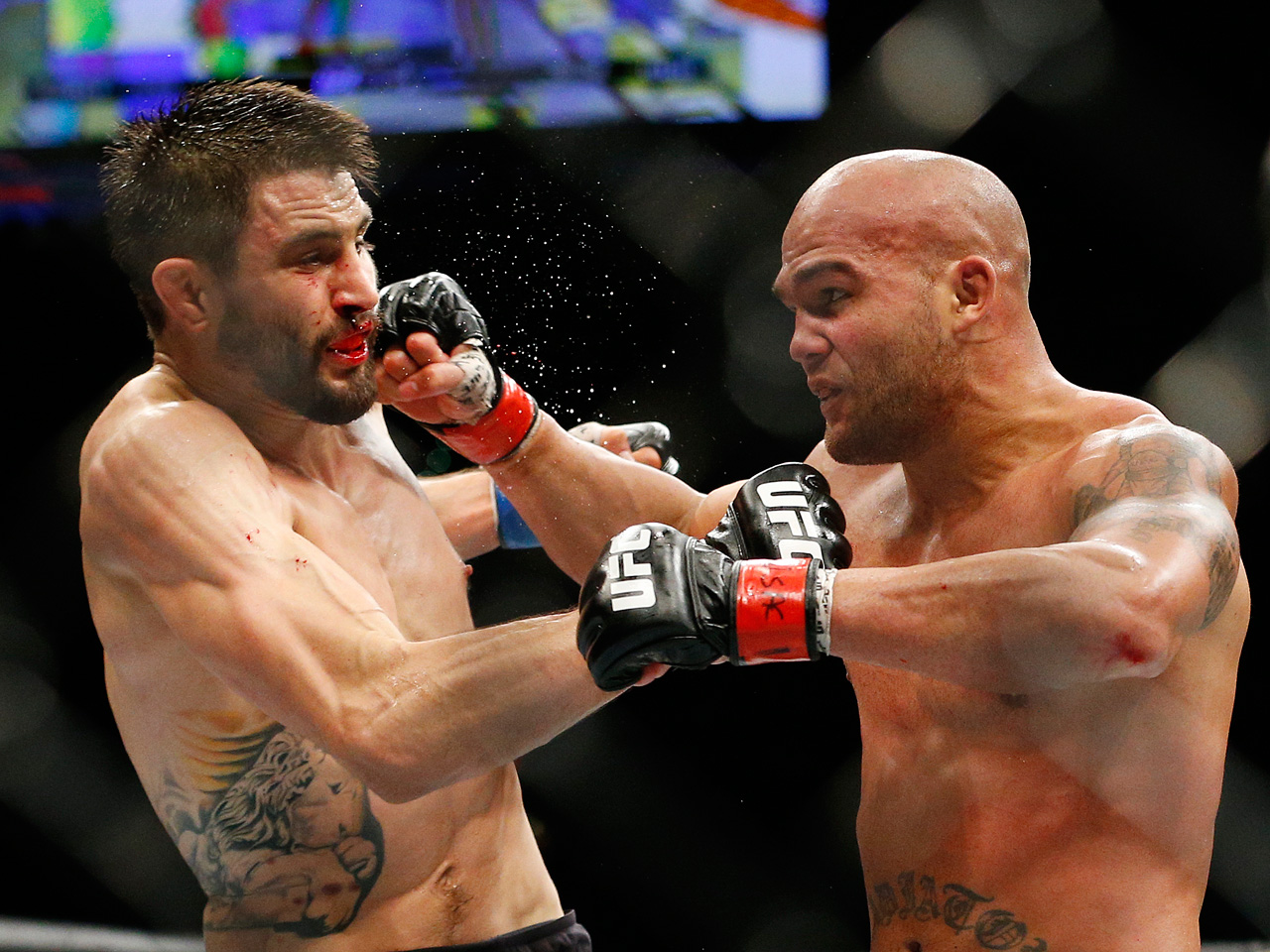 LAS VEGAS - Only the fifth-round bell could stop Robbie Lawler and Carlos Condit from punishing each other. When it finally rang, the champion and challenger stood side-by-side with their arms leaned up on the cage, wearing exhaustion and respect on their bruised, bloodied faces.

Although Lawler kept his title by a narrow margin, he can't wait to do it all again.

Lawler defended his UFC welterweight belt with a split-decision victory over Condit at UFC 195 on Saturday night, getting the promotion's new year off to a thrilling start.

"That's just two competitors with a lot of heart and a lot of skill just trying to get the job done," Lawler said.

Lawler (27-10) was awarded the decision after a 25-minute brawl that had the MGM Grand Garden Arena crowd on its collective feet in the fantastic fifth round. Condit (30-9) landed 120 more strikes and wobbled the champion multiple times, but Lawler's power did enough damage to win three rounds on two judges' scorecards.

A few moments after they spontaneously leaned on the cage together, taking deep breaths and basking in cheers, they ended the night with their arms mutually raised in victory. While Condit said he would consider retirement, Lawler had a better idea.

"There was two winners tonight, and let's do it again," Lawler said.

Earlier, Stipe Miocic stopped Andrei Arlovski with punches 54 seconds into the first round, likely earning a heavyweight title shot with a victory in the UFC's traditional New Year's week show in its hometown.

But Lawler and Condit established a lofty benchmark for the best fight of 2016 with their draining slugfest. Both fighters landed huge strikes and big knockdowns, yet both bounced up and kept fighting into a brutal fifth round in which they struggled to lift their arms for punches or defense.

"I thought there was a good chance I was ahead," Condit said. "I knew he was going to come out guns-a-blazing. You have to come out and fight. I wasn't hurt neurologically, but I was roughed up a little bit. I thought I had three rounds in the bag, but that happens."

Condit was disappointed, but not surprised, after losing for the fourth time in six fights despite landing 198 strikes to 78 for the champion. The third round was the only one in dispute on the judges' scorecards, with Lawler getting the nod on two cards despite Condit's 22 strikes to Lawler's 10, which included a vicious elbow.

"I don't even remember much about what happened in the third," Lawler said. "I was trying to live it minute by minute."

Condit connected in the fourth with a short left hand and a right behind Lawler's ear, wobbling the champion and unloading on him before the bell. The fifth was a flat-out brawl.

"I'm not dejected," Condit said. "I have to evaluate, but there's a possibility that might be my last one. We'll see."

UFC 195 kicked off the new year after a tumultuous, successful 2015 in which seven of the UFC's 10 champions lost their belts, including Ronda Rousey, Jose Aldo and Jon Jones. Lawler was among those who hung on to his title, winning a similarly grueling and bloody last-round knockout over Rory MacDonald in his only fight of 2015.

"He's our Evander Holyfield," UFC President Dana White said of Lawler. "He's never in a boring fight. When he gets hurt, he continues to go toe-to-toe."

Lawler's matchup with Condit only underlined his reputation as a tenacious veteran willing to do anything to preserve the title that he finally won 12 years after his first UFC fight.

"I'm just going out there to knock someone's head off and get a quick victory, but for some reason these guys won't stay down," Lawler said.

Condit had done just about everything in MMA aside from winning an undisputed UFC belt. The 13-year veteran pro held the interim UFC title in 2012 before losing the belt to Georges St. Pierre, who described the New Mexico wrestler as his toughest opponent.

Before the main event, Miocic likely earned a shot at the UFC heavyweight belt with an opening-minute victory. The 6-foot-4 firefighter from the Cleveland suburbs has won five of six fights despite enduring winter travel delays on his way to Vegas this week.

Miocic ended it abruptly when he caught Arlovski with a short right hand to the chin and another against the cage moments later, sending the veteran Arlovski defenseless to his knees. Miocic celebrated his victory by running across the cage to White and UFC CEO Lorenzo Fertitta, yelling at them to "Give me my shot! Come on!"

The 33-year-old Miocic is likely to be the next contender for the heavyweight belt after champion Fabricio Werdum's rematch with former champ Cain Velasquez next month at UFC 196 in this same Las Vegas cage.