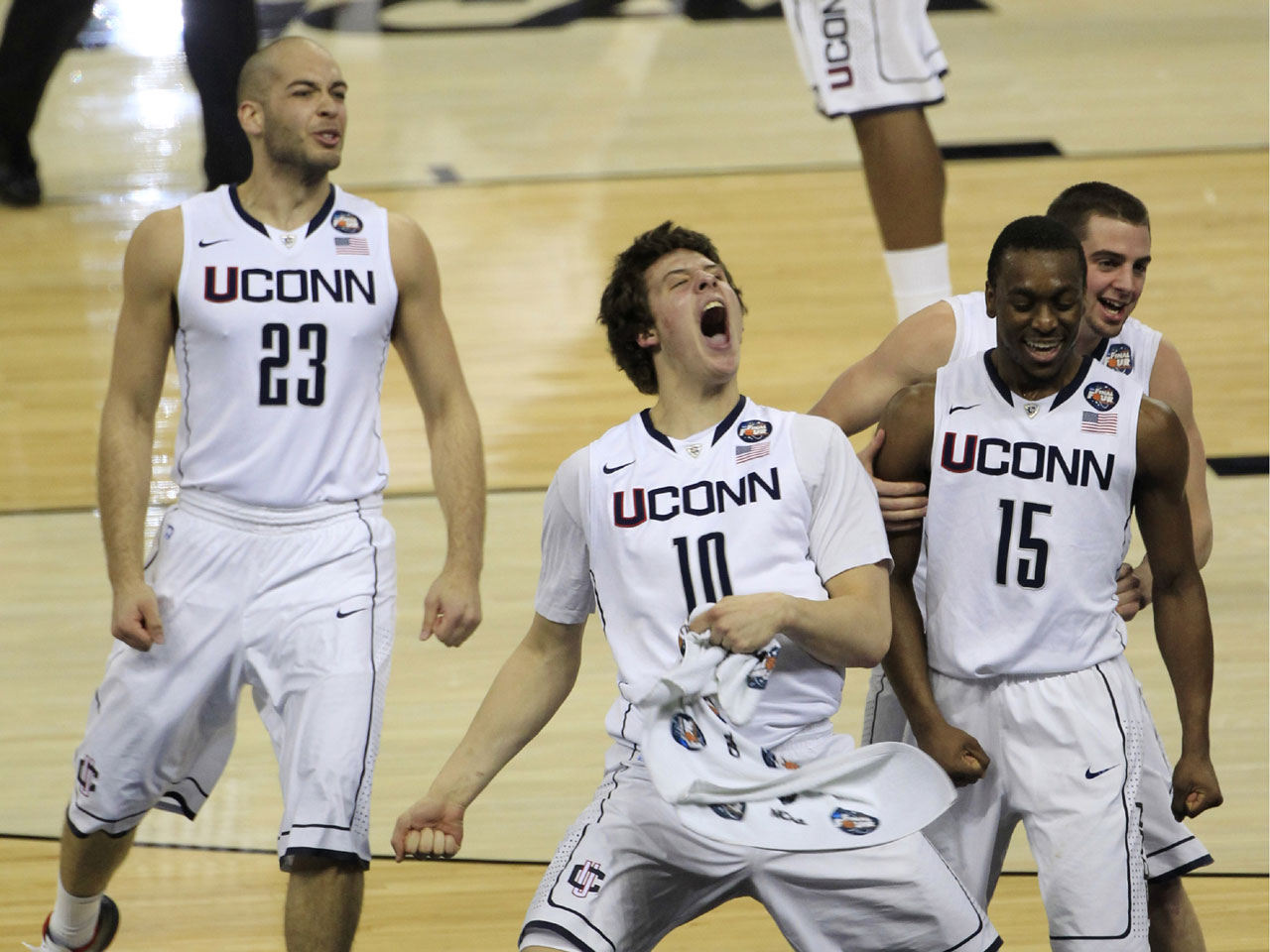 A record 10 men's basketball teams, including three-time national champion Connecticut, will be banned from next season's NCAA tournament because of sub-par work in the classroom. UConn becomes the first BCS school to face a postseason ban in either of the two most prominent college sports based solely on the annual Academic Progress Rate scores, which were released Wednesday by the NCAA.

Each of the schools fell below the mandated cutline of 900 on their four-year scores. The APR measures the classroom performance of every Division I team. This year's data calculates rates from 2007-08 through 2010-11.

Cal State Bakersfield, which became a full-fledged Division I member in 2010-11 and does not yet have a conference affiliation in basketball, could still be removed from the banned list because some its data is still being evaluated.

"I think if a (BCS school) didn't make it, it would look really bad," Ohio University professor David Ridpath said last week. Ridpath is also past president of the NCAA watchdog The Drake Group.

All the banned teams, including Connecticut, face additional sanctions of losing a minimum of four hours of practice time per week, which must be replaced by academic activities. The penalties could create an unusual scenario for the seven affected conferences.

Not only will UConn and the other teams be ineligible for NCAA play, but league officials could also rule them ineligible for the individual conference tournaments. If that happens, it could force changes in the tourney pairings.

Big East presidents have already said any team ineligible for the NCAA tourney will not be allowed to compete in conference tournaments, including UConn.

"We'll have to adjust the bracket accordingly," Big East associate commissioner for men's basketball Dan Gavitt said Wednesday, noting the Huskies could still win an appeal to the Committee on Academic Performance. "Until CAP makes that final determination, we're not going to have any comment. We wouldn't change the brackets. We would accommodate it in such a way that it would work. We would just have to eliminate a game and move someone up on the line."

None of this came as a surprise to Connecticut, which had a four-year score of 889 and lost an appeal to the NCAA for a waiver that would have allowed it to play in next year's tourney. School officials contend that if the NCAA used the team's two most r recent scores, 826 in 2009-10 and 978 in 2010-11, UConn's two-year score would be 902 and argued that school's self-imposed changes are already producing better academic results.

Two leagues, the Southwestern Athletic Conference and Colonial Athletic Association, each have two teams facing postseason bans. Four others — the Big West, Mid-American, Ohio Valley and Southland — all have one team on the list. They have not yet said what they will do with the ineligible teams.

But the penalties could have a significant impact.

"If there's one, two, three four different teams in any given conference, it would have a major impact in how the bracket, how the tournament is run, ticket sales, television exposure," Gavitt said "I think that's the goal of the presidents — to make the penalties more impactful, more meaningful."

NCAA rules allow each individual conference to determine how to award their automatic bid. In addition to banning ineligible teams from league tournament play, they could give the automatic bid to the regular-season champ or tourney runner-up if an ineligible team won the postseason tourney. Or they could forfeit the bid, which is the unlikeliest scenario.

Only three football teams received postseason bans — Hampton, North Carolina A&T and Texas Southern. All are members of the Football Championship Subdivision and are considered historically black colleges or universities. The only other teams to get postseason bans were Central Connecticut State in men's soccer and Northern Colorado in men's wrestling.

In all, 54 teams fell below the 900 mark with roughly 80 percent (43) of them coming from what the NCAA defines as limited-resource schools.

"It's another cottage industry for between the haves and the have-nots," Ridpath said last week. Ridpath is also past president of the NCAA watchdog The Drake Group.

Despite the penalties, the overall numbers are improving.