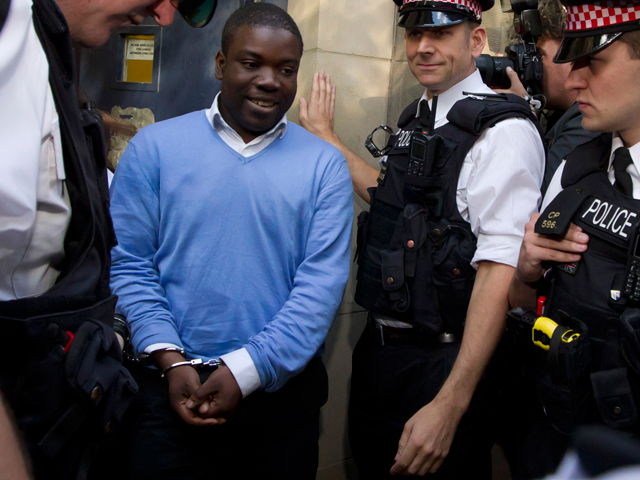 Presiding magistrate Carolyn Wagstaff told 31-year-old Kweku Adoboli he would be held until another court appearance on Sept. 22.

Adoboli, who is charged with one offense of fraud by abuse of position and two offenses of false accounting, did not enter any pleas at the brief hearing at the City of London magistrates' court.

Wearing a light blue sweater and a white shirt, Adoboli smiled as a court clerk read aloud his name, and spoke only to confirm his details and his address in east London.

Prosecutors said that the alleged offenses took place between 2008 and earlier this week.

The young trader, who was arrested Thursday, has been employed by UBS on an equities desk known as Delta One and worked with exchange-traded funds — which track different types of stocks or commodities, such as precious metals.

"He involved himself with trades which were highly dangerous for the bank," prosecutor David Levy told the court.

Adoboli was represented by law firm Kingsley Napley, who previously appeared on behalf of Nick Leeson — the trader who brought down British bank Barings in 1995 after he made around $1.4 billion of losses in unauthorized trades.

In Switzerland, UBS faced pressure to explain how its managers failed to catch the $2 billion loss, and how monitoring systems had been unable to flag up the alleged unauthorized trades.

Some commentators and politicians called for senior managers at UBS to take responsibility for the loss.

"Until UBS has explained in detail how such a significant loss due to unauthorized trading could happen, and how the problem will be solved, confidence will remain impaired," said Andreas Venditti, an analyst at Zuercher Kantonalbank.

The international banking industry has been trying to implement stricter controls on traders in the wake of a 2008 scandal at France's Societe Generale, when trader Jerome Kerviel gambled away euro4.9 billion ($6.7 billion), and the infamous Leeson case.

UBS stock on Friday recovered some of the losses suffered the day before. Investors took the chance to buy the shares cheaply, sending their price up 3.3 percent to 10.07 Swiss francs ($11.52) on the Zurich exchange by early afternoon. Shares had slumped 10 percent the day before, after the bank said a lone employee had caused the massive loss.

Educated at an exclusive school in a picturesque patch of English countryside, Adoboli was known to neighbors as a polite and well dressed young man who mixed grueling hours in London's financial district with a lavish social life in the capital's nightspots.

But even the 31-year-old Adoboli appeared to foresee his work hard, play hard lifestyle unraveling. "Need a miracle," he posted on his Facebook page, just hours before his arrest early on Thursday.