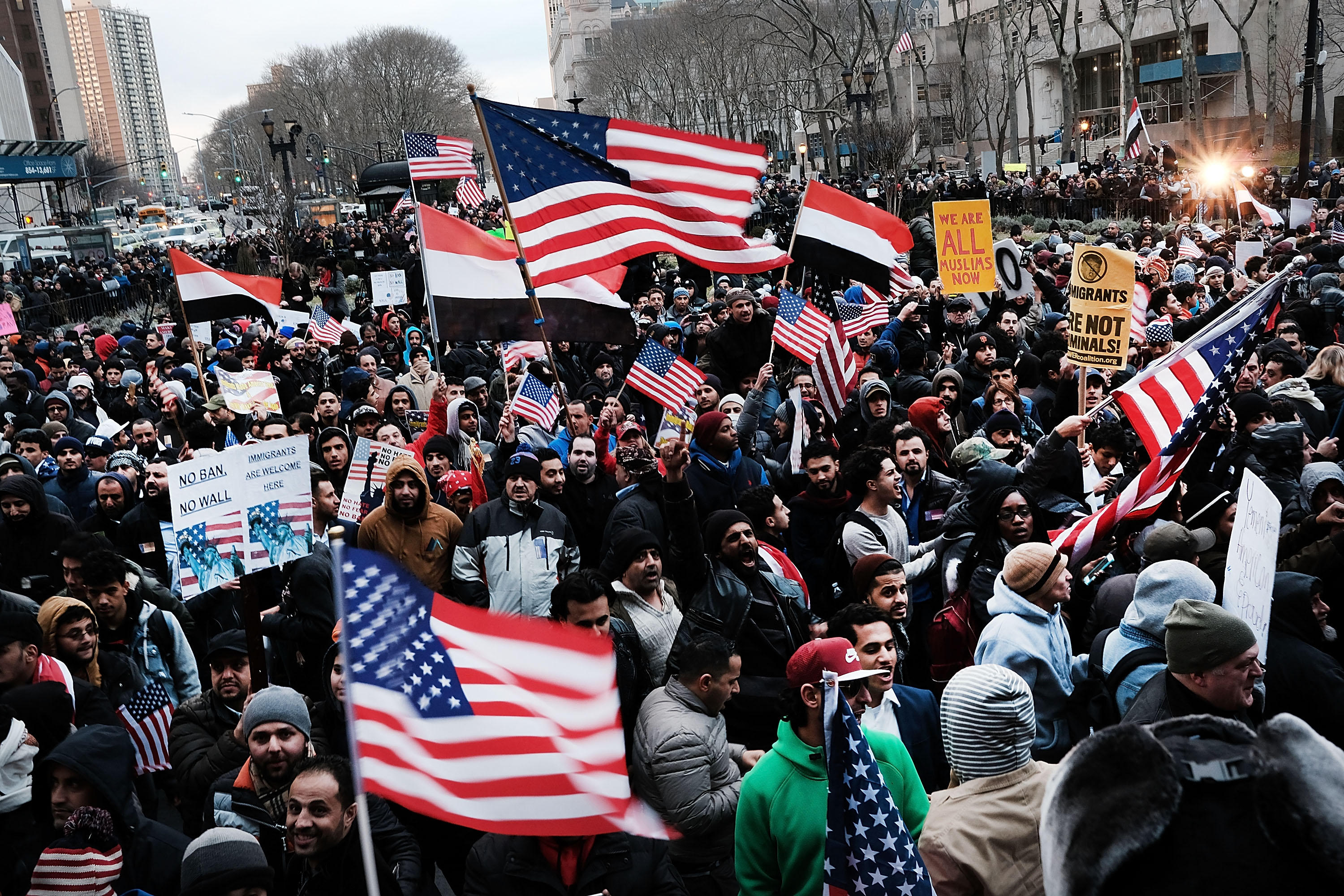 The limit on the number of refugees entering the U.S. this year has been reached — kind of.

The Trump administration set a cap of 50,000 refugees entering the U.S., a number that was hit ton Wednesday. This comes at a time when the number of displaced people worldwide has recently hit an historical high of 65.5 million, according to a recent report by the UN. The astonishing numbers mean that 20 people were forced to flee their homes every minute in 2016.

"We reached the 50,000 cap on refugee admissions on July 12," said a State Department spokesperson. The department allowed all refugees scheduled to travel to the U.S. until this date to come.

But there is a catch: refugees can still enter the U.S. if they can prove close familial relationships to people that are already in the country. This new exemption is the result of a Supreme Court ruling in late June on Trump's travel ban executive order.

"Beginning July 13, only those individuals who have a credible claim to a bona fide relationship with a person or entity in the United States will be eligible for admission through the U.S. Refugee Admissions Program," explained the State Department.

A bona fide relationship includes a parent, child, spouse or a son/daughter. It also extends to in-law family members and siblings of any kind. Grandparents, grandchildren, aunts and uncles do not qualify.

The interagency team working to implement the court's ruling pulled the definition of a bona fide relationship from the Immigration and Nationality Act. Some groups are going to court to expand the kinds of relations that qualify. It is unclear if their cases will be settled before the new fiscal year begins on October 1st.

In practice this close familial relationship loophole muddies the water on the total number of refugees that will actually enter the US this fiscal year, as there's really no way to predict the exact total.

This is a unique situation because every year the president sets a cap for refugee entry. President Obama had increased the refugee cap to 110,000 from 85,000 in 2016 and 70,000 in the 3 years before that. Trump has now succeeded at cutting that number down. As it stands, the 50,000 ceiling is a sharp decrease, but it is not the lowest number of refugees that have come to the US in one year since the 1980 Refugee Act was passed. After 9/11, the refugees entering the U.S. dropped to just over 27,131 in 2002.

The US is "constantly looking at ways of improving our screening to be able to make sure that Americans here at home are safe and we're allowing in the kinds of folks who don't want to do us harm," said Heather Nauert, the State Department spokesperson, last month. But there has not been any analysis shared with the public to demonstrate that lowering the refugee cap will improve security for American citizens.

Many human rights groups and refugee resettlement organizations are critical of the Trump administration's posture towards refugees.

"Today, the Trump administration, without consulting with Congress, has started to enforce the lowest refugee ceiling since Congress unanimously passed the Refugee Act of 1980. Countries much smaller and poorer than the United States are hosting much larger numbers of refugees and asylum seekers, while the U.S. is doing less and less," Mark Hetfield, the CEO of the pro-refugee group HIAS, said.

"It's arbitrary meanness and it is horrible for the stature of our country," adds his colleague, Melanie Nezer.

In 2008, through the Refugee Crisis in Iraq Act, congress afforded Iraqis direct access to U.S. resettlement program through because of their relationships with the U.S. military. Now, this program is also at stake.

"Many Iraqis and their families who served the U.S. military, government, contractors, NGOs, and media, and are now in danger due to that service," said Eleanor Acer of Human Rights First in a press release. "Tens of thousands of Iraqis have been waiting for years already to be resettled, in dangerous situations."