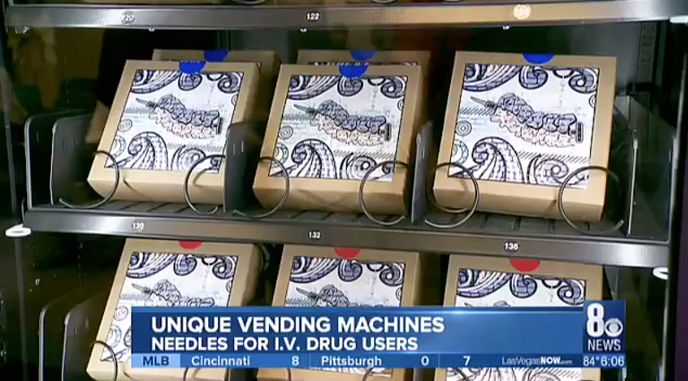 LAS VEGAS -- Southern Nevada will soon become the first place in the country to have vending machines that dispense free needles to drug addicts.

CBS affiliate KLAS reports it’s part of an effort to reduce the transmission of diseases like HIV and hepatitis C. The vending machines were unveiled Wednesday.

They look just like any other vending machine, except no money is required. If someone pushes a button, a kit drops.

Inside the kit, there’s a box of 10 syringes, a rubber tourniquet, a needle disposal container for the used needles, alcohol swabs and band aids, as well as an information sheet about where you can find treatment.”

There are other independent needle exchange programs in the Las Vegas metropolitan area, but these are the first vending machines and it is the first program to collaborate with the Southern Nevada Health District. The three machines will be paid for with private donations.

One in 10 HIV diagnoses occur in IV drug users.

The people behind this say providing free clean needles will reduce the temptation to spread infection by sharing dirty needles.

“It’s going to be safe, it’s going to be secure, they ‘re going to be able to access the services, and hopefully go into recovery testing and better their lives,” said Antioco Carrillo of AFAN. One of the machines will be located at AFAN.

Of course the argument against free needle exchange programs is that by providing free needles they encourage drug abuse, but Dr. Cade says there are no legitimate studies to support that notion.

The three machines will be located in downtown Las Vegas, away from the tourist Strip.